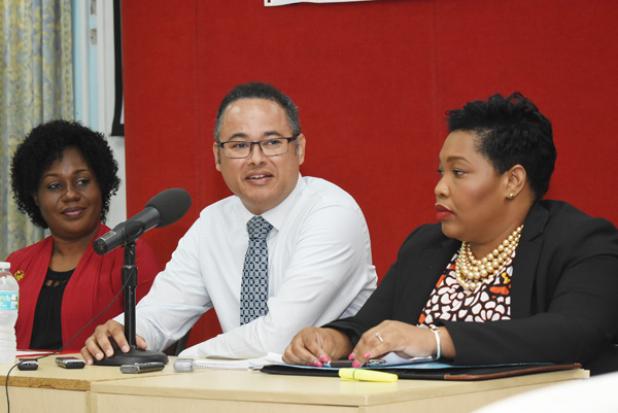 WHILE outlining the vision of the Barbados Light & Power Company Limited (BL&P), Managing Director Roger Blackman says greater focus will be placed on the customer.

To this end, he revealed that a new Customer Solutions Centre has been created and will be headed by Kim Griffith-Tang How.
Speaking at a press conference yesterday morning, Blackman explained that efforts will be taken to identify new products and services to be rolled out over time by the company. On the list will be fuel hedging, which the officials explained will offer greater protection to customers against rising fuel prices.
According to Blackman, an application was made to the Fair Trading Commission and the company is currently going through a written hearing process and is currently awaiting feedback from the Intervenors.
“We are dependent on fossil fuel. Oil prices are very volatile and from time to time the spikes in oil prices can be quite a burden on our customers, so we have proposed a fuel hedging programme that is essentially a contractual tool that allows us to shield our customers from major swings in oil prices.
“So it is essentially an insurance against the volatility and large swings in oil prices. A few years ago, oil prices shot up well about US$100 per barrel. At one point Government stepped in to subsidise fuel prices, that was simply because of the impact such a major spike in oil prices would have had on customers.
So we are going through that process and we are pleased with what we have achieved so far,” Blackman told the media.
As it relates to the Renewable Energy Rider (RER), it was explained by two officials that the programme has in no way yet reached its maximum.
According to Griffith-Tang How, “The Fair Trading Commission (FTC) would have previously set a limit on the RER Programme of 20 megawatts, at present we have 12 megawatts installed. We also have committed to be installed an additional eight megawatts, but we have given recommendations to the Division of Energy that the small-scale photovoltaic systems we can accom-modate up to 45 megawatts on the system. It is not full and we are still working with customers and installers to continue to add to our Renewable Energy Rider.”
Blackman observed that when the RER started back in 2010 the interest was not very high, but there subsequently have been some changes. “The economics admittedly would not have been as good as they are today, and so the programme started a bit slow but it did pick up in popularity and it has grown quite well over the years, and we have quite a lot of capacity on the network through that distributed system.
“The programme started to slow a bit last year as oil prices came down and of course it is linked to oil prices. And therefore earlier this year we engaged with the regulator on having the programme reviewed and we are quite happy with the decision that came down last week from the FTC. We believe that the decision will result in a resurgence in the interest and we are all geared up to implement that this month as required by the FTC,” he said. (JH)