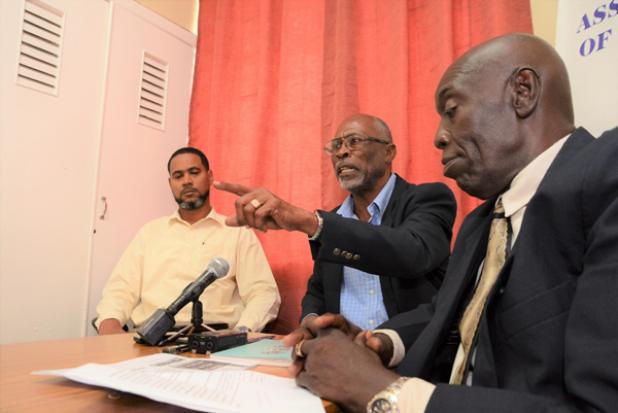 CTUSAB President Edwin O’Neal (centre), General Secretary Dennis de Peiza (right) and Assistant General Secretary Sean Spencer, as they sought to address a number of issues relating to the Budgetary Proposals and the impact of government’s BERT programme, at a press conference yesterday at the Union’s headquarters.

The Congress of Trade Unions and Staff Associations of Barbados (CTUSAB) has expressed deep concern about the burdensome nature of some measures being carried out under government’s Barbados Economic Recovery and Transformation (BERT) programme, and the subsequent impact on workers.

During a press conference convened at CTUSAB’s headquarters at The Garrison, St. Michael yesterday, CTUSAB President Edwin O’Neal; General Secretary Dennis de Peiza; and Assistant General Secretary Sean Spencer sought to address a number of issues relating to the Budgetary Proposals introduced by Prime Minister Mia Amor Mottley earlier this year, and they also gave a re-assessment of the impact of the BERT programme.

De Peiza stressed that government’s retrenchment exercise at the level of the public service has taken a negative effect on service delivery and proven burdensome on those left behind.

“I think we are more and more concerned with the whole problem that is associated with the delivery of public services at this point because clearly, the retrenchment programme in the public sector is taking a [negative] effect on not only the service that is being rendered, but those who are left behind, who are forced into a position that they have to do more than one task, but there is no consequential rise in pay,” he commented.

“These persons who would have gone home would have received a package or payment, but how long will that sustain them in a family setting where they have mortgages to fulfil, other obligations and they are facing the rising cost of living?” he added.

Pointing out the high number of consultants in Government, he argued that “there is a small group of persons who are going to be living comfortably, whilst thousands of Barbadians go home and meet hardship day to day”.

O’Neal meanwhile spoke about the burden the increase in bus fare, as announced recently in the Budget, will have mainly on those in the lower income bracket.

“Middle-income earners may be better able to absorb it, but those who are already starting at under $300 a week, who have to take four buses a day, and if you throw in two or three children in the mix, it exponentially raises the cost of living for families who cannot afford it, who are already out to the baller. The kite is going to pop,” he argued.

The union heads meanwhile cried down Government’s approach of not having CTUSAB’s voice heard on certain critical matters, but instead simply presenting to the union gathered at the Social Partnership table what measures Government has already decided upon.

“The discussion has to be wider because labour has to be involved deeply in the discussion, not being told of what is going to happen, and that is part of the problem that we are facing. It is all well and good to say that labour is on board, but on board in what way, by being told?” de Peiza asserted.

“We need to be a part, where we present, talk about our ideas, approaches and strategies and at least see them as being embraced and drafted in the overall plan. Because if that is not the case, then we have serious issues how we perceive labour and labour’s engagement in the whole development of initiatives in the best interest of Barbados going forward,” he maintained. (RSM)