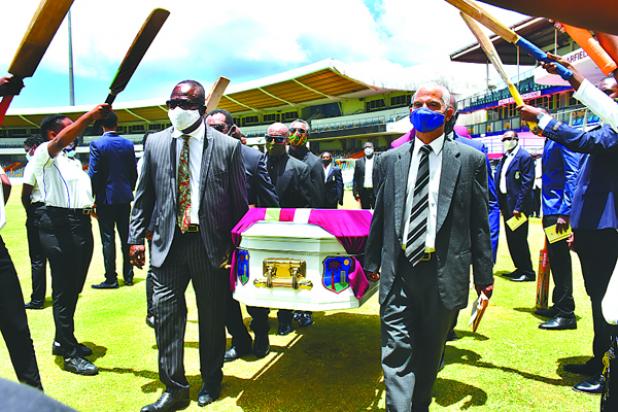 Barbados and West Indies opener Desmond Haynes (left) and Adrian Donovan leading the pall bearers out of Kensington Oval under an honour guard of bats.

One of the greatest middle order partnerships ever struck up in world cricket can now resume as Sir Everton DeCourcey Weekes KCMG, GCM, OBE was laid to rest yesterday. Weekes, who died at the beginning of this month and made up one third of the iconic Three Ws, along with Sir Clyde Walcott and Sir Frank Worrell, had his body interred with his close friends at the 3 Ws Oval at Cave Hill Campus.

During the official funeral service at Kensington Oval, Sir Everton was eulogised by Professor Sir Hilary Beckles, who regaled those in attendance with a history lesson on the greatness of the man, calling him one of the ‘greatest revolutionaries of our Caribbean world’ and ‘a disturber of colonial peace’. Highlighting the little-known fact that Weekes was a Lance Corporal in the Barbados Regiment, he went on to speak to his accomplishments inside his ten-year Test cricket career as he put himself and Barbados on the map. “When adult suffrage was finally won in our country, the global cricket fraternity expressed its peer appreciation of Sir Everton and designated him the best batsman in the world. In this recognition and elevation, he became the first Barbadian to be classified and celebrated as number one in the world in any approved and respected endeavour. This was a seismic, seminal moment. Barbados, not yet a nation state, and under colonial oppression, had received its first international endorsement as a place that produced performance excellence. The island entered the annals of international popular culture and the society that gave life and nurture to a native recognised as a special gift to humanity,” he said.

Going on to hail him as “a hero, an artist, a humanist and the existential expression of goodness that resides as the key element in what is constituted as greatness”, Sir Hilary called his home club Empire the greatest incubator of cricketing talent the world has known. As he went on to wax eloquent of Sir Everton and and his legacy, he called him a symbol of truth that made the Caribbean nation possible and sustainable. “He was the harbinger, the one who announced the coming of the flood of greatness in the next generation that found expression in the priceless person-hoods of Sir Gary and Sir Wes. These men became bearers of God’s truths – that a people can be enchained, a people can be disenfranchised, a people can be tortured and tormented, but their intellect and eternal inner sovereignty can never be driven from the fertility of their souls,” Sir Hilary said.

On the more personable side, close family friend Adrian Donovan offered a tribute on behalf of Sir Everton’s family and said that the man was a humanitarian of enormous proportions but very few people knew because he had a small inner circle. Noting that Sir Everton was the last of a group of lifelong friends to be called home, Donovan said that the group, which included his own father, could be found most evenings debating cricket late into the night. “The discussions sometimes were fierce, robust, muscular and at times, very jovial, depending on the subject of the day. It could range from Spartan to Empire battles, West Indies and Australia and Barbados and Trinidad rivalries. This group would meet any time after work during the week and it was a waste of time for wives or other members of the family trying to interrupt any of these sessions and many of them tried,” he quipped.

Of his batting and coaching prowess, Sir Everton honed them both on his own and never hesitated to pass on what he had learned over the years as explained by Donovan. “Sir Everton entertained many a national player at his house who would drop by seeking advice or just to have a conversation on how to improve his game. He was always accommodating and never for one moment discouraged anyone from reaching for the stars. He never, ever received any form of coaching. During his time, he would say he came through the New Orleans Community Academy where his Test strip was in the backyard or in the road and these coaches included members of the community who all deemed themselves as cricket experts.”

Known only to his closest friends as “Shorty”, Donovan said that he would be leaving us to pick back up his innings with his compatriots. “Let us celebrate this day and remember ‘Shorty’ who lived just around the corner here in Pickwick Gap and who made Kensington his second home. As he leaves us, he will continue his partnership up on the hill at UWI where he will be reunited with two of his comrades who made us all proud,” he said. (MP)