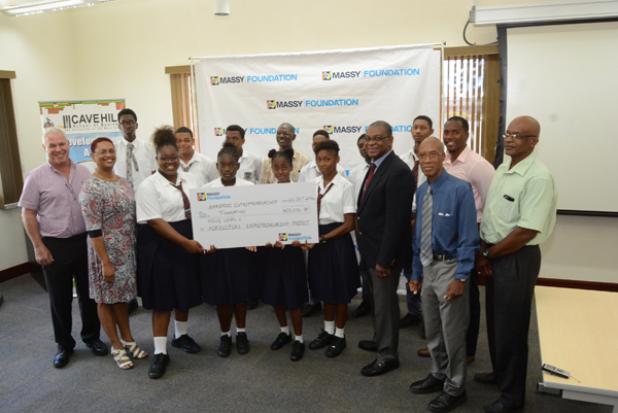 (At centre) Students and teachers of some of the schools participating in the programme pose with the cheque, along with (at left) BEF Chairman, Chris Decaires; and CEO, Celeste Foster; and (at right) Chairman of the Massy Foundation, Everton Browne; Consultant, Dr. Richard Graham and the Agriculture Ministry’s Youth Agri-preneurship Incubator Programme Manager, Kareem Payne.

THE island must adopt an approach allowing businesses and education to connect.

Chief Executive Officer of Entrepreneurs In Action, Derek Browne, made this clear on Saturday night, as he spoke during the closing ceremony of the Schoolroom to the Boardroom programme, at the Courtyard Marriott.

Saying that it was time to look at what was being done differently in businesses, education and society after 50 years of independence, he insisted that the failure to allow business and education to connect was hurting the country.

“We are going through the fastest technological revolution the world has ever seen. Therefore, I think the three ‘Rs’ are no longer going to be enough,” he said, later adding that schools must consider how they are going to embrace new styles of learning, in order to bring them into the 21st century.

Browne used the opportunity to pose several questions to the audience, including: “Do we want an educational system that will be the envy of the world again? Do we want Barbados to be known for its innovation?

Ultimately, do we want a Barbados, that in a hundred years, has a reputation for excellence, innovation and talent. Yes, we do, and we can make it happen,” he stated.

Speaking to the 27 young individuals, who successfully designed a business plan that would take Harris Paints forward, he outlined that their creativity, innovation, collaborative work, teamwork and solving unstructured problems, were going to put them in good stead.

“The limitations are only in your head,” he advised, while urging them not to revert to doubting their talents.

“Pay it forward, it means that there are younger people you can now help and inspire and change their lives. Someone did it for me when I was younger, and now I pay it forward to young people all the time. Always be brave, embrace the challenge and accept opportunities,” he continued.

Thanking Harris paints for facilitating this year’s cycle of the programme, Browne issued a challenge to corporate Barbados to get on the entrepreneurial train.

“You will be the next generation of leaders in Barbados, and hopefully the world,” he stated. (JMB)