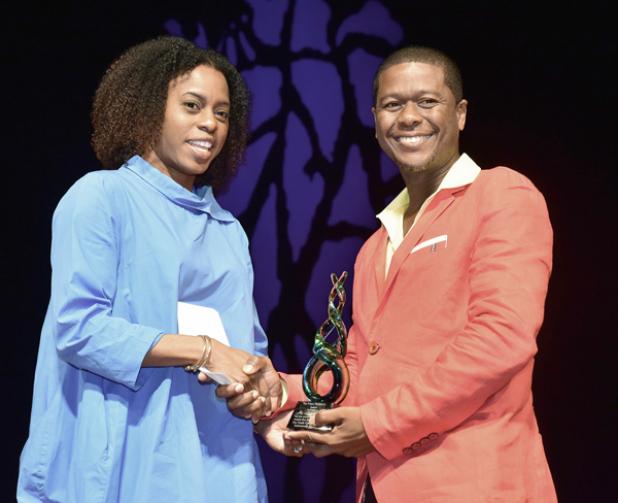 Director of Cultural Policy and Research, Dr. Donna Greene, presents Anderson Lowe with the Prime Minister’s Award for his entry called ‘Inside the Blackbelly Sheep’. He was also awarded the third prize. 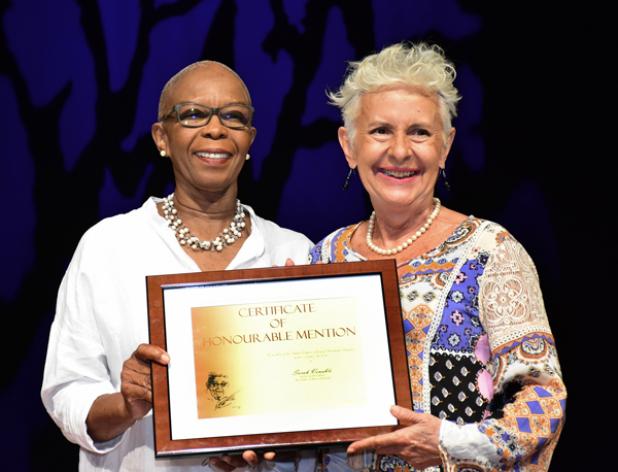 Sarah Venable was given an Honourable Mention for her entry called ‘The Tropic of Sweet and Sour’. She received her certificate from Chair of the FCLE Committee, Esther Phillips.

CHAIRPERSON of the Frank Collymore Literary Endowment (FCLE) Committee, Esther Phillips, says there are signs that confidence is growing in writers as they record the authentic experiences in the Caribbean.

This observation was made during the 22nd FCLE Annual Awards ceremony held in the Frank Collymore Hall on Saturday night, where Phillips revealed that there has been a significant increase in entries over the last year, moving from 44 to 70. She noted, however: “While we would be happy to see high numbers every year, we believe these fluctuations in numbers to be normal.”

She told those in attendance that it is evident that the FCLE sees itself as a viable body in the transmission, dispersion and archiving of literature produced right here in Barbados. “While the FCLE will never tell people what to write, I am personally gratified to see that individuals are becoming more and more confident that our own life in the Caribbean is worth writing about.

“The so-called American novel, for example, is rooted in American values, norms, cultures, traditions, histories and linguistics; we too must see the value of recording our own authentic Caribbean experience. We need have no fear of parochialism, since every experience we write about from the standpipe or rum shop to the corporate offices or the heights and terraces, derives from the universal experience of human complexity and struggle to which we are all subject.”

Of the 70 entries submitted to the competition this year, 32 were poetry, 22 fiction, 8 non-fiction, and 8 drama. It was explained that several scripts were eliminated early in the competition because work submitted was not substantial enough for the committee to make a reasonable assessment. “Let me point out that finalists are invariably those who submit a wide enough range of work that allows judges to gauge the true quality of the writing.

“It is not only the content of your work however, that the Committee evaluates, but we look for qualities such as maturity of thought, mastery of style and language, the intuitive understanding of how speech must be adapted to character and situation; how well perhaps you are able to manipulate the use of humour, irony or satire to good effect. In short, how skilfully you handle the demands of your particular genre. We do see some of these qualities in some of the work we evaluate and look forward to seeing their greater development over time.”

While delivering the judges’ report, Phillips also gave an update on the workshop organised by Chief Workshop Co-ordinator, Andy Taitt and the Outreach Programme, which she lamented is moving a little more slowly than the committee would like.

Sharma Taylor was presented first prize, taking home $10 000 for her collection called “Hollow Calabash”. Second with a $6 000 prize went to Claudia Clarke for “CircleSquare” and the third prize of $4 000 went to Anderson Lowe for “Inside the Blackbelly Sheep”. Lowe also took home the Prime Minister’s Award. Honourable mentions were Ingrid Persaud for “So it Go” and Sarah Venable for “The Tropic of Sweet and Sour”. (JH)