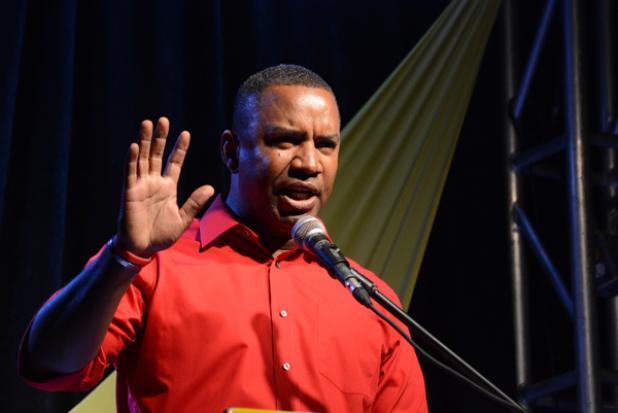 Senator Wilfred Abrahams talked about the problems he said are plaguing sanitation in this country.

Tue, 12/13/2016 - 12:00am
An Opposition Senator has taken issue with the Government’s handling of the country’s sanitation problems, contending that more garbage trucks are required to meet the country’s garbage disposal needs.
Senator Wilfred Abrahams, who will be the Barbados Labour Party’s candidate for the Christ Church East constituency in the next General Election raised the issue as he addressed a mass meeting at Top Rock, Christ Church on Sunday night. Abrahams said the Sanitation Service Authority (SSA), is perhaps one of the most important governmental departments in Barbados, but it is not fulfilling its duty. As such, the political hopeful said that as a result of the shortage of trucks to collect the garbage, it is piling up across the country.
“We all know it takes 35 trucks to properly service Barbados, you know that, I know… why is it that most days we are struggling with 12 to 15 trucks trying to service Barbados?” he queried.
With that in mind, he also took issue with Government paying private contractors to collect garbage from households, contending that that money could have been better used to buy much needed trucks for the SSA. He suggested that the money for such an initiative for one year would likely run into the millions, but would have been better spent purchasing trucks at a cost of $250,000 each to supplement the SSA’s current fleet.
He also touched on the controversial tipping fee introduced by the Democratic Labour Party Government, contending that the Government was warned that if it was introduced, persons were likely to engage in illegal dumping to avoid paying the fee.
“They are not going to pay $40 to drop it in Vaucluse when they could dump it in the gully for free… it is not about lawlessness, it is about being practical,” he said.
He added, “We had a problem last year and the year before with all the gullies and waterways blocked with garbage and that results in flooding. You know the gullies and waterways haven’t even been probably cleaned yet.”
His comments came as he also raised concern about the people who were laid off from Beautify Barbados and the Drainage Unit; he suggested that that move is in part responsible for the flooding that occurred at the end of last month.
“If Columbus was to come back now to Barbados, he would recognise Barbados, because Barbados is as overgrown as when Columbus first discovered us… The flooding that happened the other day, that didn’t happen by accident that was not as much rain as there was in Tomas, but we had more flooding. Barbados should not have had that amount of flooding from that amount of rain and that is the result of our drains being clogged, there being no proper drainage maintenance, there being no proper cleaning of wells,” he stated.
Abrahams is adamant that the drains should have been cleaned prior to the rainy season, and that ongoing maintenance should have occurred during the season. He is suggesting that if that is done, flooding would not occur. As such, he said that if the BLP is returned to power they will not only clean up Barbados but keep it clean, reducing any health and safety risks that currently exist. Moreover, he said that they will implement a sustainable waste management programme that works. (JRT)