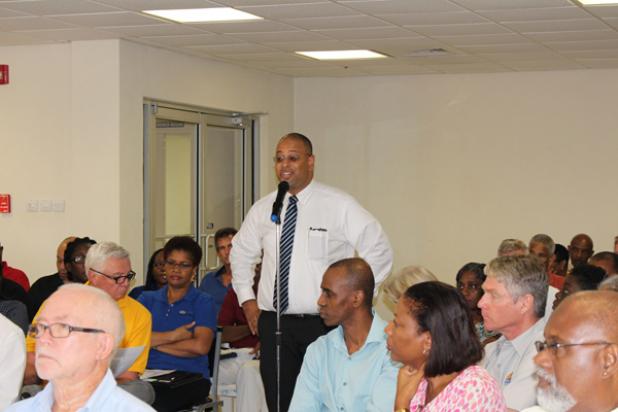 President of the Barbados Manufacturers’ Association (BMA), Jason Sambrano, making a point during the meeting.

THERE are still some things to be ironed out as it relates to putting the two per cent National Social Responsibility (NSR) Levy into practice, particularly as it relates to trade in raw materials between local manufacturers.

This was clear after a meeting held by the Barbados Investment and Development Corporation (BIDC) and the Barbados Revenue Authority (BRA), with manufacturers yesterday, to discuss the NSR Levy which came into effect September 1.

During a close to two-hour meeting at the BIDC’s Building 2 Harbour Industrial Park office, several manufacturers voiced their concern about the new Levy, which Minister of Finance and Economic Affairs, Christopher Sinckler, recently announced is intended to help finance the cost of health care in this country, with some of them contending that the fact that they are required to charge the levy to fellow manufacturers for raw materials, was likely going to put added strain on their businesses, and make imports similar to what they produce a cheaper alternative.

Addressing those gathered, President of the Barbados Manufacturers’ Association (BMA) and Managing Director of Roberts Manufacturing Company Limited, Jason Sambrano, used the example of his plant which produces oil. He explained that the said oil which would be a finished product for him, can also be a raw material in someone else’s production, which would require him to charge the two per cent to that registered manufacturer.

“But then that registered manufacturer can go and import that oil for their production process and have the two per cent waived. How is that fair? That is discriminatory to local manufacturing,” he lamented.

The BMA president also noted that if this remains the case, it can have significant cost complications for many manufacturers. Moreover, he said that if some manufacturers determine it is cheaper for them to import than to buy locally, it could also have implications for the foreign exchange reserves.

“I think it is something that needs to be looked at urgently without regard to clarification,” he said.

In response, Senior Manager, Policy Planning and Governance at the BRA, Anthony Gittens said that it is a matter his office will follow up on. He made the comments while noting that it is a policy issue, and policy, he said, is set by the Minister of Finance and not the BRA.

“We have the intimation with him about it, and if there is a change, we will inform you, but until such time, we can only tell you that once you are a manufacturer and you are selling an item that is manufactured in Barbados, you must charge the two per cent,” he said.

If the policy changes, Gittens indicated, the issue of refunds relative to the levy paid, if applicable, will also be addressed. (JRT)