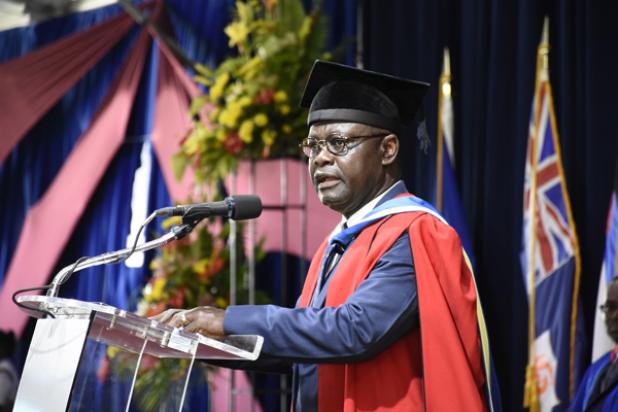 An invitation has been extended to The University of West Indies (UWI) to deepen its relationship with the leading university in West Africa.

This comes from Vice-Chancellor of the University of Ghana (UG), Professor Ebenezer Oduro Owusu, who believes that his institution and The UWI should escalate their partnership arrangements to the next level.

“This is because, the bond that has developed will allow us to step into the world and speak with one voice on pertinent global issues of poverty, disease, squalor, inequality, discrimination, and marginalization that have been inflicted on our peoples through the evils of slavery and colonialism.”

Professor Owusu was at the time addressing the 2018 Graduation Ceremony of the Cave Hill Campus, after being conferred an Honorary Doctor of Science (DSc) in recognition of his work as an agricultural scientist.

“Our shared identify and heritage provides the impetus for the two nations to realize these common aspirations for the betterment of the lives of our peoples,” he explained.

The Vice-Chancellor said that together, the two institutions can build synergies in the areas of Education, Agriculture, Health, Democracies, Environment (Climate Change issues), and Economies of Scale.

“On the global front, climate change has become a common enemy, and needs to be looked at with a critical eye in order to understand and address it head-on,” he stressed.

“Human activities such as deforestation and the burning of fossil fuel are contributing to the changes. Evidence of this includes prolonged droughts, floods, tsunamis, hurricanes, increase in oceanic acidity, desertification, and other extreme weather conditions. These phenomena affect people’s livelihoods by contributing to poverty, food insecurity, and conflicts over resources, as well as, outbreak of epidemics, among other things.”

Professor Owusu further expressed that the University of Ghana and The University of West Indies share a common vision of becoming centres for training the minds to solve global problems of poverty, climate change and others.

He also noted that the two institutions are poised to emancipate the people from poverty through cutting edge research.

“I know UWI is at the forefront of providing leadership to the region’s quest for economic development and to uplift the youths from the evil of societal poverty and marginalization. Indeed, Sir Arthur Lewis and Sir Alister McIntyre, former Vice-Chancellors of the University of the West Indies, were known for their refusal to accept the inevitability of structural endemic poverty in the Caribbean.”

“Likewise, I pledge to lead the University of Ghana to develop innovative paradigms to facilitate change in behaviour and attitude for progress,” he assured.

Professor Owusu thanked The UWI for what he described as an “extraordinary honour.”

“I accept it ecstatically both for myself, family, and also on behalf of the University of Ghana where for 25 years I have worked as Chair of the Volta Basin Research Project (VBRP), Secretary to the University Teacher’s Association (UTAG), Head of Department, Vice-Dean, Dean, Provost and now the Vice-Chancellor.”

“The honour done me today gives me renewed zeal and vitality to work harder in the quest to contributing significantly towards the creation of effective interventions, in the global efforts of making this world a better place for us all,” he said. (TL)