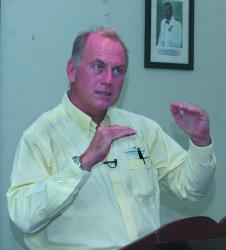 CLINGING to the belief that their closed hotels could still fetch a price tag similar to a decade ago, a number of owners are refusing to sell them at a lower cost.

This is the view expressed by Managing Director of Caribbean Island Properties, David Coombes, who insisted that at a time when this island is seeking to generate income, it could not afford to have hotels and other properties sitting abandoned on prime real estate.

“The owners of those properties have in their minds what they felt they could have got ten years ago – we are in a different market now. The price is the problem,” he argued.

Pointing to the South Coast corridor extending to Browne’s Beach, and the transformation created by the presence of the Richard Haynes boardwalk, he insisted that this was a prime real estate development area, and expressed his belief that now was the time for government to step in and address this issue.

“I think that the government has a right, in areas like that which are prime tourism belts, which this country has to have working, to say, ‘if you cannot find a way as the owner to sell, we will help you find a way,’ because there has to be a period of time for you to get what you want, and after that, you will have to put it into use or give us a good reason why it is not being used,” he suggested.
The real estate expert also knocked government for not putting its abandoned properties into use.

“I have seen several government buildings, especially around the Garrison, that are just running to ruin,” Coombes lamented, noting that one overseas client had already expressed interest in purchasing such a property for one million dollars, with the intention of restoring it and returning it to government after two decades.

“There are opportunities where I could put persons into government homes, offices or buildings that we cannot afford or we do not have a need for right now, find a creative way to put them into use without losing them, so that person can enjoy them for 10,15, or whatever years, and then we get them back. What we cannot allow is for them to just sit there and run down. We cannot do that!” he emphasised.

He made the comments at the Democratic Labour Party lunchtime lecture on Friday.