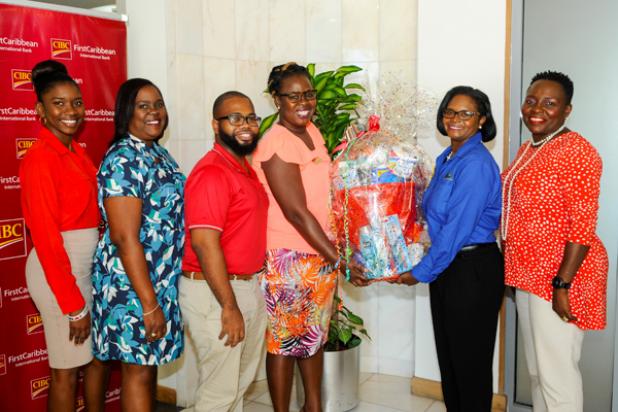 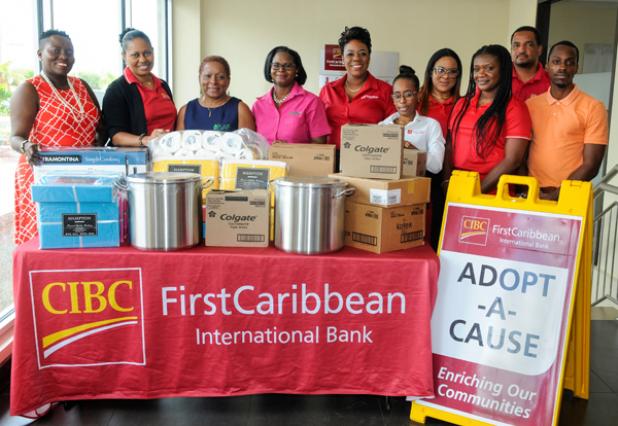 Employees of CIBC FirstCaribbean International Bank and representatives of the Substance Abuse Foundation posing with some of the items donated at the Wildey Branch.

Women suffering with addictions are being urged to seek help at Marina House, a residential treatment centre for females over 18 years.

This appeal came from Marietta Carrington, Chief Executive Officer of the Substance Abuse Foundation Inc. (SAF), which operates Marina House for women and Verdun House for men. Carrington explained that without adequate help, the disease would progress and the problems of those suffering with the illness would worsen.

She said women, struggling with addictions, hid their problems in ways that differ from men, but the impact was equally devastating and touched their immediate families including children, friends, as well as society.

The effect, she said, can be seen in reduced productivity of the affected persons as well as in crime and other anti-social behaviours.

Carrington made these comments during the first of two presentations from CIBC FirstCaribbean to Marina House. The charitable effort was the latest in the bank’s ongoing support for the work of the SAF.

She described CIBC FirstCaribbean as a long-time supporter of SAF adding that over the last four to five years, a resurgence in the bank’s involvement with the organisation had been taking place.

The first of the two recent presentations took place at the bank’s Warrens St. Michael headquarters, where the Speightstown branch handed over toiletries to Marina House. Branch manager, Therese Clarke said that branch members had put together funds to buy the toiletries and were in fact very happy to support a good cause.

A few weeks later, Marina House received clothes, kitchen utensils and other necessities from the Wildey Branch and the bank’s Corporate Communication Department. Wildey’s Branch Manager Sue Malone said the branch’s staff members acknowledged the importance of helping others to make a fresh start in their lives and had readily supported the appeal for the branch’s involvement.

Clinical Director Angela Sealy, who expressed thanks on SAF’s behalf, said she knew that the ladies at Marina House would be very appreciative of the items as well as the fact that CIBC FirstCaribbean had recognised the need to contribute to the effort as the women started to rebuild their lives.