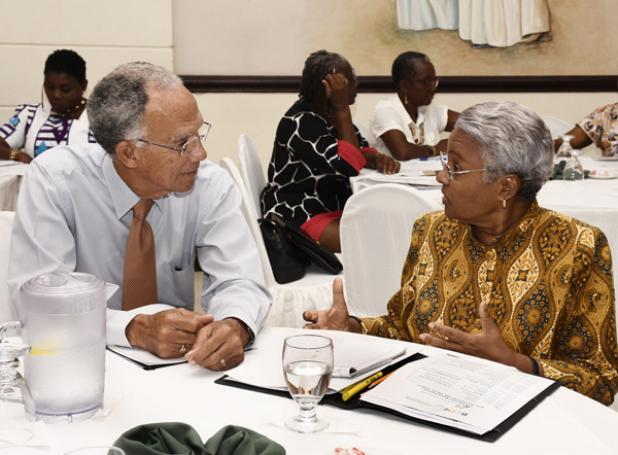 Obesity in children represents the greatest threat to the health of future generations, and it is against this backdrop that a number of national and regional health organisations have developed some strategic plans to counteract such.

Word of this came from Sir Trevor Hassell, President of the Healthy Caribbean Coalition (HCC), as he delivered a few remarks during the Breastfeeding and Child Nutrition Foundation’s (BCNF) Stakeholder Meeting programme, which took place at The Savannah Hotel yesterday morning.

“CARICOM Heads of Government last year noted with concern that obesity in children represented the greatest threat to the health of future generations, with the level of overweight and obesity being more than 30 per cent in both primary and secondary school populations in many Member States,” he said.

“Against this background, the Caribbean Public Health Agency (CARPHA), PAHO (Pan American Health Organisation), the Barbados Ministry of Health and the HCC, have all produced Strategic Plans which, together with national NCD strategic plans and policies involving multi-sectoral and ‘whole of society’ approach, are aimed at addressing the childhood obesity epidemic.”

Hassell noted that a review of these plans show that there are a number of actions that can and should be taken in Barbados through policies and enactment of legislation to slow the increase of obesity.

These actions include increased levels of physical activity among school-aged children by the reintroduction of periods of compulsory physical activity; prohibiting advertising and promoting of junk food in schools by fast food companies; and an increase in the tax on sugar-sweetened beverages to a level which will result in these beverages being more expensive than healthier options.

“This provides a blueprint for regional Civil Society Organisations in efforts to counteract childhood obesity,” he said.

“The major priority areas of the Plan are trade and fiscal policies, nutrition literacy, early childhood nutrition, marketing of healthy and unhealthy foods and beverages to children, school and community-based interventions, resource mobilisation and strategic planning, monitoring and evaluation.”