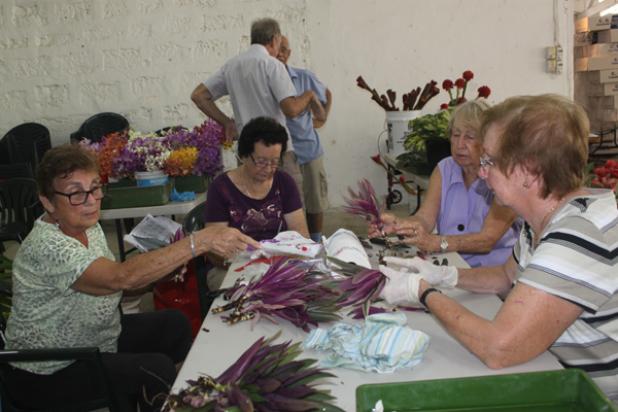 (From left to right) Frances Chandler, Maureen Marshall, Anne Cave and Valerie Hutchinson preparing the plants for packing. INSET: Marcia Powlett trimming off the excess leaves off the plants prior to packaging.

Off to Chelsea Flower Show!

Shirley Anne Howell, Co-ordinator of the local exhibit for the Show, told The Barbados Advocate that the group is hoping to attain its 18th gold medal when the judges’ results are revealed on Tuesday, May 24th.

“Last year, we did ‘Gullies of Barbados’, and we got our 17th gold medal. We have been exhibiting for 28 consecutive years. We have 17 gold medals, 10 silver guilts and one silver medal. So we always medal at Chelsea. We hope for another gold.”

Howell was speaking to the press at the Society’s Ball, Christ Church location yesterday, where individuals were busy cleaning and preparing the plants and flowers, which will be shipped to England. These will be used in the local exhibit during the Show, which will be held from May 24th to 28th.

Howell indicated that this year’s floral arrangement will be one with a difference, paying special tribute to Barbados for its 50th Anniversary of Independence.

“The theme this year and the name of the exhibit is, ‘This Island Barbados’ and it is a different exhibit. It is a 20 x 20 square and it is on different levels.

“On the top level, the main level, is a big cut out of the shape of Barbados, complete with all the boundaries for the parishes, and that is what we call the map, and we will be covering the boundaries [of each] parish with a different type of foliage, and maybe a few flowers. The main exhibit of flowers will be on the grounds.”

She further said that the drought experienced over the past months did have an impact on the quantity of flowers the Society was able to obtain. However, special thanks was given to the hotels, businesses and individuals who provided plants and flowers to be used for the 2016 exhibit.

“We have had no difficulty in getting foliage, but yes, our flowers are not as numerous as we would normally have, expect for the orchids – we have massive [amounts] of orchids. Well, we are just using a few anthuriums than we normally do and what can be done at Chelsea, if you are short of something, you can go to the flower mart and buy some flowers there, but we are hoping not to have to do that,” she added.