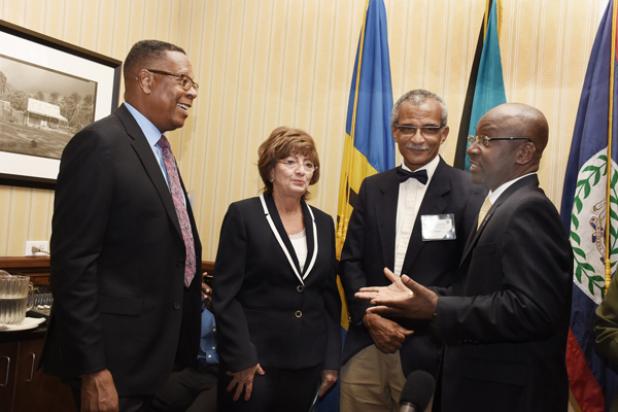 From left: Organization of American States (OAS) Representative, Francis McBarnette; Ambassador of the United States to Barbados, the Eastern Caribbean and the OECS, Linda Taglialatela; Darryl Brathwaite, President of the Grenada National Trust; and Minister of Culture, Stephen Lashley, conversing on the sidelines of the OAS’ Showcase of Achievement of Phase 2 of the OAS Cultural Heritage Project at the Hilton Barbados Resort, yesterday.

Barbados has been lauded for its championing of the issue of culture and development in the councils of the Organization of American States (OAS).

OAS Representative Francis McBarnette said that Minister of Culture Stephen Lashley has been one of their strongest advocates of culture and cultural heritage, frequently reminding others of the important role that these elements play in nation-building and regional development.

Yesterday, McBarnette also expressed his appreciation for the government’s continued support shown to the OAS’ “Expanding the Socio-Economic Potential of Cultural Heritage in the Caribbean” project, which is designed to focus on the rich heritage resources of the region.

“As Caribbean countries seek to develop new sectorial opportunities for social and economic development and strive to continue to diversify their economies, we believe, that this project will be able to shed light on some areas that can be exploited,” he observed during the Showcase of Achievement of Phase 2 of the OAS Cultural Heritage Project held at the Hilton Barbados Resort.

Describing the project as “very ambitious,” McBarnette further acknowledged that it seeks to enhance the value and potential of a non-traditional area of activity. According to him, the OAS hopes that the project has succeeded not only in building awareness of the social and economic value of Cultural Heritage in this region, but has provided some of the necessary tools to realise these benefits.

“I believe that the project and our involvement in it should respond to an area of priority within our Member States. While not all CARICOM Member States have made specific reference to the development of the Cultural Industries, in general, and of Cultural Heritage, in particular, among their national priorities, the inherent potential of the region’s Cultural Heritage has a direct effect on the realisation of other stated goals related to poverty alleviation, social
stability, inclusion, and the creation of job opportunities”.

Ambassador of the United States to Barbados, the Eastern Caribbean and the OECS, Her Excellency Linda Taglialatela said that the United States government is a prime supporter of the development agenda in the Organization of American States, an agenda which is important to the Caribbean region.

“The United States government has supported this particular project from the beginning and we think it has potential to aggregate your efforts in beginning an effective vehicle, to help preserve the deep and very Caribbean culture and heritage”. (TL)