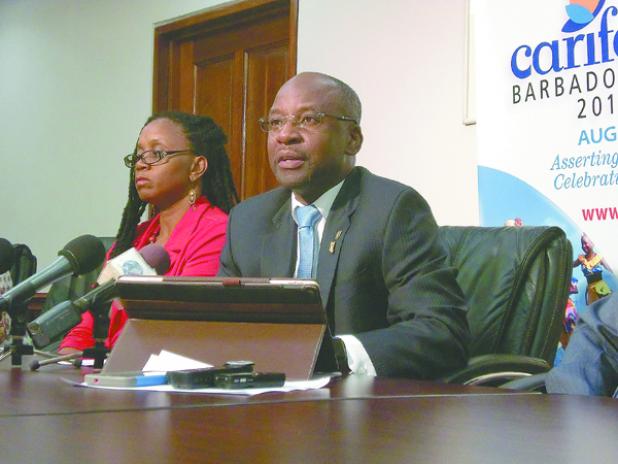 Fri, 01/20/2017 - 12:00am
Some 3 000-plus artists, artistes and artisans are expected to converge on Barbados for the 13th edition of the Caribbean Festival of Arts (CARIFESTA XIII).
Minister of Culture, Sports and Youth, Stephen Lashley made this disclosure as he provided an update on the August 17–27 festival, which will be celebrating the spirit of CARICOM people through the expressions of art, music, food, folklore, theatre and dance.
Under the theme “Asserting Our Culture, Celebrating Ourselves”, the event will be part of the Barbados Big Summer of Festivals season, as it closely follows Crop Over.
Minister Lashley believes that Barbados’ hosting of CARIFESTA XIII at this time is key to its strategic platforming for economic growth via use of creativity.
He acknowledged that several countries, including Barbados, have gone the route of placing a lot of emphasis on the creative sector.
“Cultural industries today loom large as being a new frontier for economic development. Indeed CARIFESTA, within the context certainly of 2017 and going forward, would have to basically reflect the realities of what has happened in the region in relation to utilising the creative energies of our people, to ensure that we can create new creators and new engines for economic growth,” he said.
Lashley, who was at the time addressing a press briefing at his Ministry’s SkyMall office, also revealed that during the 13th edition, Barbados will launch the newly modelled marketplace for buyers, distributors and exhibitors at the Grand Market & Buyer’s Shopping Mall, designed to showcase the emergence of the Caribbean Cultural and Creative Industries.
He further divulged that CARIFESTA XIII events include two Super Concerts featuring regional and international star-studded performances; and three Signal Events for the High Arts. He signalled that there will be space allocated for events to be staged by persons and organisations other than official delegations, providing room for private participation within the
festival.
Venues identified for events are Kensington Oval for the opening and closing ceremonies; the Lloyd Erskine Sandiford Centre (LESC) for the Marketplace; Queen’s Park Steel Shed and
several secondary schools. Lashley said that a budget of $2 million has been allocated for renovations and upgrades of those facilities.
“I am quite satisfied with the progress of the plans to date. We would have started this plan quite a while ago to ensure that Barbados is prepared and that Barbados can execute a CARIFESTA at a standard that all of us can be proud,” he expressed.
Thus far, St Lucia, Bahamas, Bermuda, Guyana, Belize and Antigua and Barbuda have expressed interest in taking part in CARIFESTA, including several non-CARICOM countries.
Last time CARIFESTA was held in Barbados was 1981.
(TL)