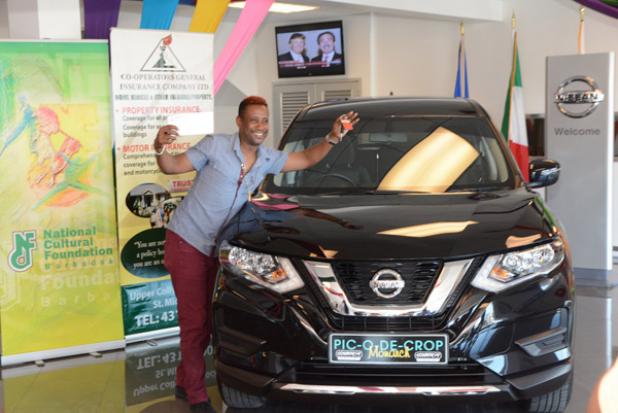 While admiring the SUV which comes with comprehensive insurance from Co-Operators General Insurance, Mr. Blood admitted that he wasn’t sure whether he would keep it.

“I’m still thinking about what I will do with the vehicle. I love it; I love the colour… It is a really good machine,” he expressed.

Representing the Big Show Tent, Mr. Blood who made it to the Pic-O-De-Crop finals on several other occasions, came out on top this year with songs “Sexual Harassment” and “Stars and Stripes”.

He described the competition as “keen” and stated, “Everybody came out and did their best...I just tried to stay as focused as possible and do everything that I had planned.”

“I think I will be defeating next year. The fans are saying that I have to defend next year so I don’t want to disappoint them...I haven’t done a post-mortem as yet, but that will happen, and of course plans are already being put in place for next year. Not just for Pic-o-de-Crop but for all the competitions across the board.”

Signaling Courtesy’s participation in the 2019 Festival, Gaston however said that he wasn’t sure whether they will offer another X Trail.

“The models change and depending on how things are in the market at the time, we make a decision as to what we will offer,” he explained.

“Maybe a truck as Mr Blood pointed out could be an option. I don’t think one was presented before, we always had cars and we moved onto SUVs being offered within the Festival – but never a double cab pick-up and that would be interesting.” (TL)