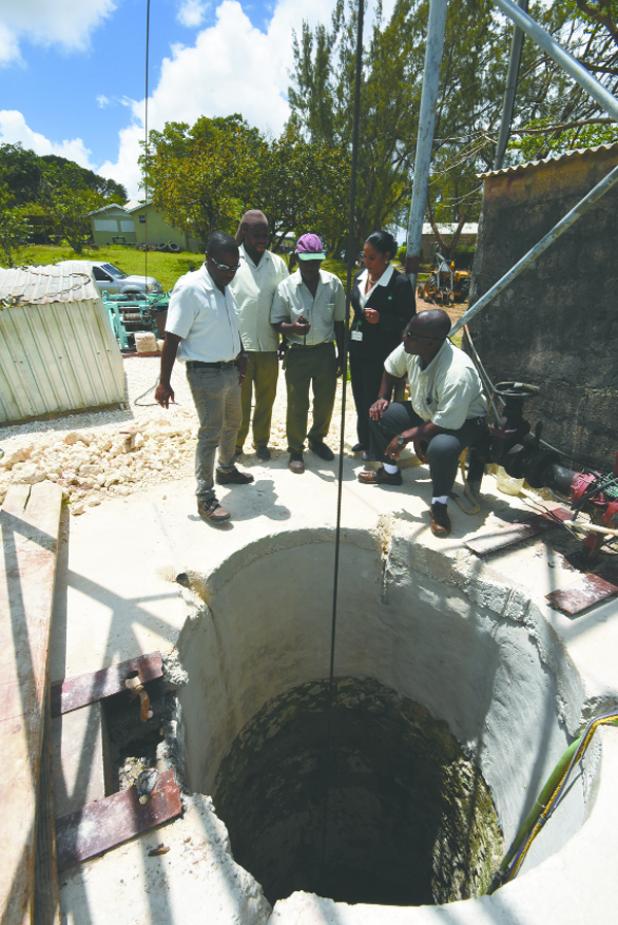 Wed, 04/13/2016 - 12:10am
By:
Janelle Riley-Thornhill
Various crews from the Barbados Water Authority (BWA) will remain hard at work over the coming weeks, to ensure that the two new supply sources that will feed into the Castle Grant reservoir can come on-stream this month.
Yesterday morning when the Barbados Advocate, along with the BWA’s Communications Specialist Joy-Ann Haigh and Senior Engineer in Operations and Maintenance, Wayne Richards visited the first of the two sites, Groves Well located at Groves Agricultural Station in St. George, a dive team was immersed in the 220-foot well carrying out work.
This well, which the BWA officials explained once serviced the Andrews Sugar Factory, will produce half a million gallons of water per day that will be sent to the Golden Ridge Pumping Station and then on to Castle Grant to ensure that the residents serviced by that reservoir get much needed water. With that in mind, the Communications Specialist commended the affected residents for their patience during the disruption of service, adding that the wider country can learn a lot from their resilience.
Meanwhile, in terms of the Sweet Vale Well Pumping Station on which work is also continuing to make certain it can be commissioned in a few weeks’ time, Haigh explained that this establishes for the first time, a direct feed into the Castle Grant reservoir. Her comments came as she noted it has been four months since the Authority contracted local company Ward Drilling Inc. to help resolve the issue of reduced water supply to St. Joseph, St. Andrew, St. Thomas and St. John, and the BWA is now at the pressure testing phase.
“The company [Ward Drilling Inc.] went out to Sweet Vale to do exploration work between December 11th and January 13th, 2016, to see whether or not we could pump water from that area. By January 14th one production borehole to pump water from this area was drilled, and test pumped by the company between January 14th and February 16th, and that was to determine how much water could be pumped without negatively impacting any of the neighbouring wells. They ndicated that the well could yield half a million to one million gallons per day and thereafter the BWA went in on February 10th to start to lay 700 metres of new main from the Sweet Vale borehole to an existing main going to Castle Grant. From then to today, is four months – that’s a lot of work that’s been accomplished in record time,” she said.
Richards indicated that they are hoping all goes well, so that unlike the current situation at Golden Ridge, where they encounter challenges in consistently pumping water towards Castle Grant, they will endeavour to maintain a 24-hour supply of water directly from Sweet Vale. He made the point while adding that a booster pump has been installed at the Sweet Vale Well Pumping Station in an effort to help that precious resource reach higher evaluations in parts of St. Joseph, St. Thomas, St. Andrew and St. John.
“The well pump is in the borehole and that borehole is over 200 feet. We were pressed to find solutions to augment the supply into Castle Grant, because the main contributor to Castle Grant is Golden Ridge but a lot of the sources that go into Golden Ridge have been depleted somewhat because of the [lack of] rainfall. So basically our well levels have been lower and some of our pumping systems are challenged, so we tend to lift water and air to some extent, which slows down production and then less water goes out,” he explained.
Haigh also told The Barbados Advocate that should everything go as planned with these additional sources of water, the ultimate goal would be to stop the nightly shutdown of the Golden Ridge Pumping Station which affects thousands of other residents. Noting however that the island is still experiencing drought conditions and the water mains network is ageing; she admits there is still a likelihood water outages may occur.
However, she is assuring the public that should that happen, the BWA will work assiduously in an effort to avoid prolonged outages.
With that in mind, she is urging Barbadians to also recognise the importance of effectively managing their water supply, given that it is not an infinite resource. (JRT)