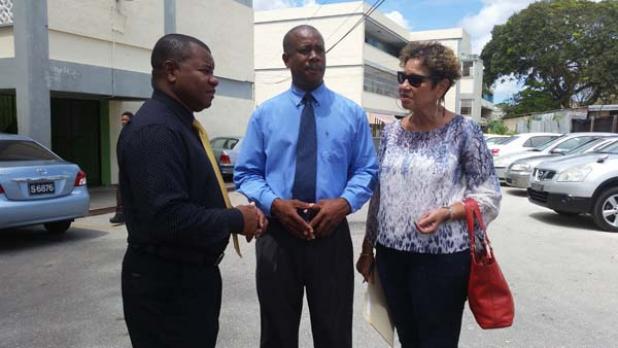 Fri, 04/15/2016 - 12:00am
The thirteen-year-old female student who physically assaulted a teacher is currently on suspension.
However, President of the Barbados Secondary Teachers’ Union (BSTU), Mary Ann Redman, will be recommending expulsion of that Ellerslie student.
She made this clear to members of the media after a meeting with Principal Major Errol Brathwaite and the Barbados Union of Teachers (BUT) at the Black Rock, St Michael school, yesterday.
On Wednesday, the teacher had to seek medical attention after she was reportedly spat on and kicked in her privates by the student.
“I think this is an area both Unions are in agreement with. The principal understands and accepts and is demonstrating a commitment to zero-tolerance to violence against teachers in this school …
“It is a united effort on all fronts to make sure that it is dealt with quickly, effectively and it sends a message not only to students here, but students throughout the country that this type of violence against teachers will not be tolerated. Violence in schools generally is something that we have to rid ourselves of in this small society.”
Major Brathwaite described the incident as “most unfortunate”. He said an investigation is being carried out and afterwards will be referred to the school’s Board of Management.
“We have to carry our investigations looking at what the law says because violence is one of these things we really cannot tolerant. We have to make decisions in the interest of our students and our staff … At the end of the day we will to deliver a quality education and we can’t do that in our environment that is disruptive,” he pointed out.
“I had a long discussion with the Unions, and they also met with staff and I think we all agree that some decision must be taken to ensure smooth continuity of the teaching and learning process here at Ellerslie.”
Optimistic about the meeting, the BUT President Pedro Shepherd stated, “We are fairly sure that going forward systems would be put in place so that we would not have what transpired on Wednesday reoccurring. However, there are other issues we would want to identify at a later date. The BUT and BSTU would be meeting shortly to put systems in place where we can have further discussions regarding this matter and other matters affecting education in Barbados.”
When questioned about the teacher’s current condition, Shepherd revealed that he spoke with her on Wednesday night as well as yesterday morning. “She is still in pain,” he reported. (TL)