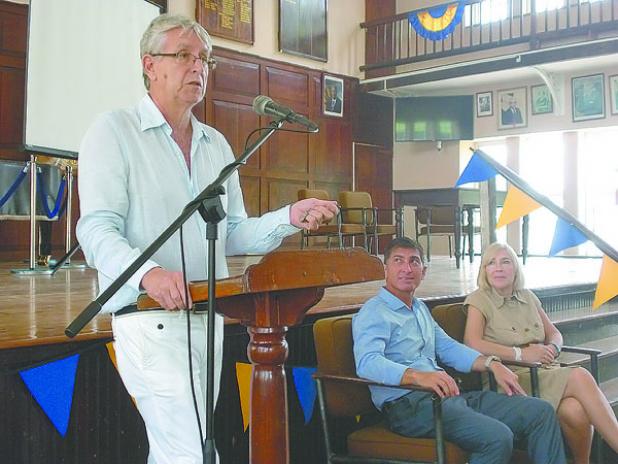 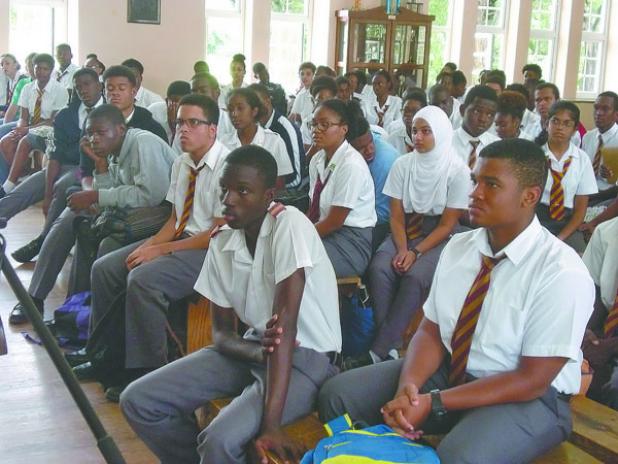 Wed, 11/09/2016 - 12:00am
Former CEO of HSBC tells students British exit a good thing for UK
Former Chief Executive Officer  of the Hong Kong and Shanghai Banking Corporation (HSBC) Limited, Michael Geoghegan, says yes to Brexit.
During an interactive session yesterday with senior students of Harrison College, he was asked  if the June 23 referendum by British voters to exit the European Union (EU) was a good decision
Revealing that the national debt of the United Kingdom (UK) stood at 1.7 trillion and its reserves 37 million, he stressed, “There is no way they can defend their currency because they have no reserves.”
“Why is Brexit a good thing for the UK? Because the UK has to wake up and realise it can’t continue to borrow and borrow. When was the last time Britain ever exported more than it imported? It was in 1997. When was the last time Britain actually spent less than it collected in taxes? It was in 1988,” he said.
“Having to make society wake up and realise it cannot continue just spending and spending, because at the end of the day it’s not them, it’s not me who is going to pay for it; it’s my grandchildren and their grandchildren. The debt is mounting up and that is one of the biggest issues in the Western world.”
Geoghegan also pointed out, “On the other side, Europe has got some very fundamental problems that it has not resolved. It would be easy to have one currency – the Euro – but you could only do that if you have one taxation system, and they haven’t…A currency is only as good as the taxes you can collect from the growth of the country that you represent.”
Geoghegan joined HSBC, one of the world’s largest banking and financial services organisations in 1973, and served as CEO from 2006 until his retirement in December 2010.
While sharing his journey as an international banking business executive, working in 11 countries across four continents, he also made it clear that the online version of why he retired is incorrect.
“If you Google me they said I left the bank because they didn’t make me Chairman. That is actually not true. I actually never wanted to be Chairman; I wouldn’t make a good Chairman,” he admitted.
“A Chairman is a much different person from a Chief Executive Officer. A Chairman is somebody who is far more status conscious, far more above being involved in the day-to-day. My personality, in my view, wouldn’t do that. I like to be at the same level as the people I lead… A Chief Executive is somebody who knows what the company does. A Chairman knows what the Chief Executive does,” he explained.
The former CEO also revealed that he and his wife Jania made Barbados their home since retiring.
“I retired here in 2011 for several reasons… Barbados has a standard of education and a moral code that is significantly better than most of the countries that I have lived in,” he expressed.
Geoghegan’s visit to HC was part of the Aron & Christina Foundation guest speaker programme where influential men and women in society are being invited to speak to students on various topics. (TL)