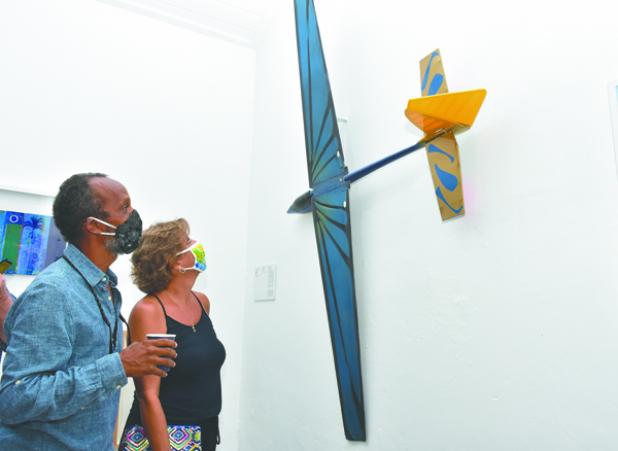 The Austin Fields contribution of the flying fish inspired Slope Glider was a popular piece with the patrons. Here Fields explains his work, the Slope Glider, to a curious guest.

Less than a year after it burst on to the regional art scene, The
Brighton Storeroom launched its third exhibition last Sunday,
welcoming guests to The Blue.

Guests had to follow the new health protocols at the gallery, which
was well ventilated and surrounded by a wide veranda that aided in the
enforcement of social distancing.

The unique exhibit, located in the natural space of Brighton, St.
George, is based on the simple premise of looking at the way in which
the primary colour of blue is used by artists and designers in their
work.

The beautiful works featured this past weekend included an eclectic
mix of paintings, collage and sculptures interspersed with items
designed and employed in everyday life by artists and designers from
Barbados, Guyana, the Bahamas, and the wider region.

Curators Dennis de Caires and Estelle Thompson were both pleased with
the turn out at the launch of the event. Thompson explained that blue
is a colour which inspires many artists around the world.

“I think…blue is a colour that lots of artists are seduced by; it is
one of those colours that is pro-emotional where you can have
different emotional pictures. It is one of those words that is
optimistic, so all encompassing and here it speaks to paradise, blue
skies and blue waters,” explained Thompson.

The Austin Fields contribution of the flying fish inspired Slope
Glider was a popular piece with the patrons. The radio controlled
glider, now with the name ‘The Big Flying Fish’, featured a paint
scheme in the wing based on the flying fish and according to Fields,
was spectacular when viewed against the backdrop of the ocean.

Another unique piece which captured the attention and imagination of
those taken in by The Blue, was the dark metallic blue 1979 Honda
CX500 motorcycle, restored by Justin Inniss. The simple, yet
outstanding tones of blue were also featured in the Personal
Protective Equipment of face masks by Yankee Garments and three
textured masks by designer Pauline Bellamy.