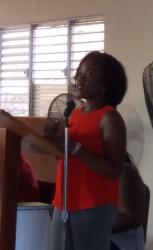 IF the Governor of the Central Bank of Barbados is removed from office, then the Minister of Finance should suffer the same fate.

He told the gathering at George Lamming Primary School, “Don’t allow yourself to be sucked in to the narrative which is being sold to us, that the Central Bank Governor, Dr. DeLisle Worrell, must go because he can’t get along with the Bank’s Board and the Board members don’t want him.

“The true narrative is this: a Governor stands and says those policies are failing; we can do that no more; I am no longer with you in that; we need to stop printing money –we are courting disaster.”

“So, when the Governor of the Central Bank, is at odds on policy with the Government of the day and the Ministry of Finance, then something has to give… and that is a narrative you need to hear,” he stressed.

This week, the 72-year-old Governor’s legal team, which is being led by Attorney Gregory Nicholls, is expected to appeal the original ruling which removed the first injunction.

According to the former Cabinet Minister, Dr. Worrell and Finance Minister Christopher Sinckler are “twins in policy”.

“The Minister of Finance and the Governor of the Central Bank, one was the voice, the other was the echo – both saying the same thing. If one must go, the other must as well.”

BLP candidate for St. Michael South Central, Marsha Caddle, also voiced concern about the impasse, telling supporters that the “fight” between the Governor and Minister is just the final straw.

The Economist also warned that this situation could hurt investors’ confidence in Barbados.

“There is no investor anywhere who will look at what is happening in Barbados and want to bring his or her money here,” she indicated.