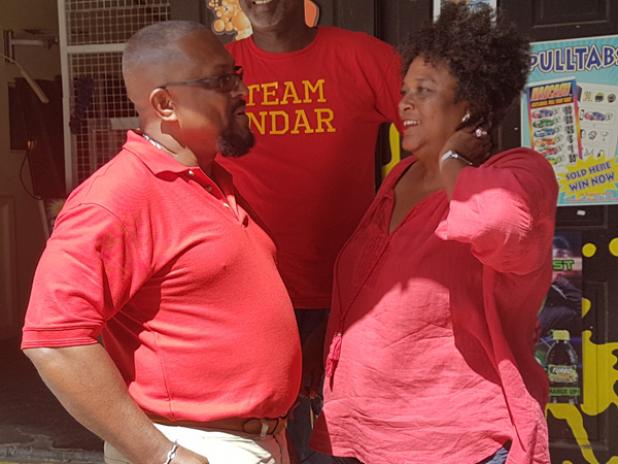 THE Barbados Labour Party (BLP) candidate for St. Philip South, Indar Weir, is accusing the ruling party of neglecting the people of that constituency.

Weir said he is concerned about the high unemployment rate in the constituency, along with the high degree of people who have fallen below the poverty line and are struggling to make basic ends meet.

Speaking to the media yesterday afternoon, in St. Martins, during the BLP’s rubbing shoulders event, Weir declared that he has seen people living in squalor, noting that the neglect is so much that people are completely disillusioned, and are finding it very difficult to come to terms with what is happening with the political system in Barbados.

“It is a task that calls for commitment and a task for a representative to come through the constituency and see what is happening and have a heart. Pay some attention to the people who have supported you and placed you where you are.

Weir also stressed that he was particularly worried about the small farmers in that constituency, who are not being facilitated in a manner through which they can support themselves, and create employment opportunities for other constituents.

He also noted that the Member of Parliament for the area, Attorney General and Minister of Home Affairs Adriel Brathwaite, has not used his position to help the people he represents to better their lives.

“You can make all the excuses about the economy and your hands are tied, but when people are willing to help themselves, it makes representation a lot easier, simply because all you have to do is go in there and help facilitate them.”

He said in his opinion, agriculture is one of the means through which the economy can grow, people can be empowered and their entrepreneurial capacity developed.

“It concerns me dearly, that we have a constituency like this where we can see people who are so willing to participate in a process of health growth, health support, health development and also self-support and we cannot come to terms with the fact that through agriculture, people can provide for their families, reduce crime, because once people can grow their own food, be able to help themselves, people do not have to resort to crime,” he said.

Weir vowed that if elected to represent the people of St. Philip South, he would place regularising the living conditions of people in the constituency, especially those squatters in Rock Hall, as a priority.

“We have to find a mature way to fix this problem. We have to work with the people over there and we have to let them know that they are people too and that if they can’t help themselves, this Barbados Labour Party administration if given the opportunity, this candidate, Indar Weir, will step in and make sure we can help regularise the lives of those people over there and bring a suitable solution, so that all can exist in this constituency comfortable,” Weir said. (AH)