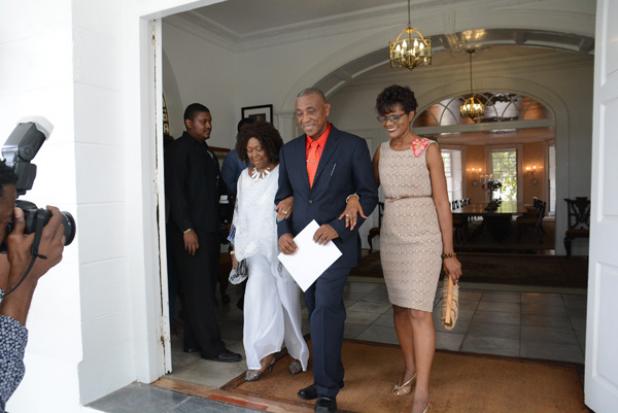 Leader of the Opposition, Bishop Joseph Atherley, leaves Government House with his wife Esther (right) and sister Eudaline after being sworn in yesterday. His son Joseph Atherley III stands to the left.

In a surprising twist, Barbados has an unexpected and new Leader of the Opposition.

On Thursday night news broke that Bishop Joseph Atherley intended to cross the floor, and yesterday morning he took the oath before Governor General Dame Sandra Mason in a brief ceremony at Government House.

There to witness the event was his wife Esther Hinds-Atherley, sister Eudaline Atherley-Roberts, son Joseph Atherley III and Chairman of the St. Michael West branch of the Barbados Labour Party (BLP), John Bancroft.

Speaking to the media after being sworn in, the St. Michael West Member of Parliament said that his move to take up the position of Opposition Leader was essentially his desire to uphold democracy in this country, revealing that he had a “very cordial meeting” with Prime Minister Mia Mottley three nights ago to tell her of his intention.

It is with that in mind that he made it clear that while his decision has been shocking to some, it is not in any way a reaction to him not being included in the ministerial appointments, nor is it a rejection of the BLP or a repudiation of the BLP’s platform and its policies, particularly those contained in the recent manifesto. The Opposition Leader made the latter point while indicating that he was involved in the process of formulating that manifesto.

“I believe very passionately in the importance of our democracy. I believe very strongly that we need to do everything we possibly can to make sure that we expand that platform of democracy. That’s the legacy of this Barbados Labour Party and in recent times if you heard me speaking, I have said often that one of the principal mandates I believe will fall to the Barbados Labour Party team, team 2018, if elected to the office of Government, would be that they would have to further expand democratic platform, democratic privilege in Barbados,” he told reporters.

Given the physical absence of an Opposition in the House of Assembly, he said it is his desire to fill that role and through it “to give critical support to Party in office and in Government”. Bishop Atherley said he will applaud them when they get it right and to “put pertinent and pointed questions to them when necessary to keep them on their toes”.

He added, “This is not about Joseph Atherley, this is about the people of Barbados, it is about our traditions of democracy, it is about our parliamentary processes and that is why I am doing what I am doing. Tomorrow I will have a fuller press briefing… There is no quarrel on my part with the Party; I haven’t seen anything to indicate there’s a quarrel on their part with me. I know some of my colleagues are disappointed at this move, but I come to this with an honest heart. I come to this moment as I have come to several moments in my life with a very serious reflection, with a sense of the leading of God and with a sense of purpose and destiny and sometimes somebody has to make the step. Sometimes it entails being the sacrifice, but the truth of the matter is, I am not in this for any personal motivation, this is about the people.”

Atherley, noting that the people of St. Michael West elected him to serve their interests, pledged to continue doing so “manfully” as he did while in and out of the House of Assembly. His comments came as he said his new role would allow him latitude to speak on behalf of the wider society and to aid in that effort, Atherley said he will announce shortly the two persons he intends to appoint to the Senate.

He spoke to that as he dismissed the notion that he was joining the ranks of the Democratic Labour Party, which suffered a crushing defeat at the polls last Thursday not being able to secure any of the 30 seats. Atherley added that he had also not given any thought to forming his own political party, and would effectively serve as “an Independent Leader of the Opposition”. His primary goal, he stated, is to represent the democratic interests of the people.

“…Sometime subsequent to the election, in sober reflection, my thinking was the people of Barbados voted to reject the DEMS, they voted massively for the platform, policies and the personalities of the Barbados Labour Party; can we honestly say that they voted that there would not be a physical presence of the Opposition in Parliament? Do you think that if you go out and poll the people of Barbados today, that in majority numbers they would say that ‘we want no physical Opposition in the Parliament of Barbados’? Do you think that would be their response? I think not,” he stated. (JRT)