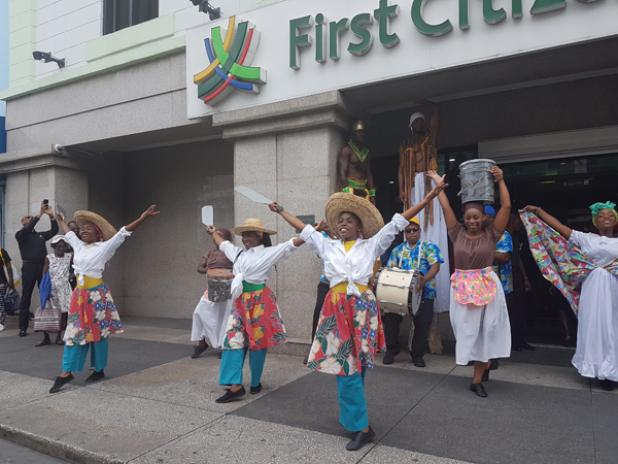 The cultural presentation which took place in front of First Citizens Bank, following the launch of FCB Crop Over Xplosion.

THE launch of the 2018 Crop Over Festival is right around the corner.

On June 2, the First Citizens Crop Over Xplosion will take place over the east of the island, with a fun-filled day for family in celebration of Barbados’ unique and inclusive cultural diversity and heritage.

Organisers are promising that Crop Over Xplosion, subtitled for this year “Tuk-It-Up”, will explore and celebrate some of those traditions, continue to tell stories, all the while gazing into that contemporary mirror at the possibilities for the future.

Delivering remarks at yesterday’s launch of Crop Over Xplosion at the First Citizens #2 Broad Street, St Michael branch, Acting Chief Cultural Officer of the National Cultural Foundation (NCF), Wayne Webster, said with all of the focus on the development of the cultural industries and on the cultivation of cultural tourism products as an emerging mainstay of the economy, many developing nations, like Barbados, have been centring their attention on the significant contribution of festivals to the cultural and economic growth in their countries.

Webster noted that preservation does not mean that Barbados does not innovate; it means that more attractive ways of showcasing the country’s heritage to a millennial audience.

“And through events like Crop Over Xplosion, subtitled for this year “Tuk-It-Up’, we can explore and celebrate some of those traditions, continue to tell our stories, all the while gazing into that contemporary mirror at the possibilities for the future.

“Speaking of the future, one of the recently made changes occasioned by the new realities within the sugar industry was our inability to continue the tradition of recognising a King and Queen of the Crop.

“As you know, over the years the harvesting of sugar cane has evolved from a completely labour intensive industry to one which is almost completely mechanised and thus has rendered the method of selection for the King and Queen of the Crop a redundancy,” he said.

This year, the two outstanding workers in the industry who will be honoured are Ernesta Williams from Applewhaites Farm, St Thomas, and Neville Cato from Castle Farm, St Peter.

Also speaking at the event, Acting Chief Executive Officer of First Citizens Bank, Robin Lewis, said the bank is pleased to again partner with the NCF for the fourth consecutive year, as this aligns with their culture and community focus, which is one of the pillars of the bank’s corporate social responsibility policy.

“We strongly believe that by supporting the Crop Over Celebrations, and more specifically, the First Citizens Crop Over Xplosion, this will positively impact the conservation and growth of Barbadian culture,” Lewis said.

Following the presentation of speeches and the cheque from First Citizens to the NCF, there was a mini spectacle with dancers, traditional characters, including stilt walkers, Mother Sally and a tuk band. (AH)