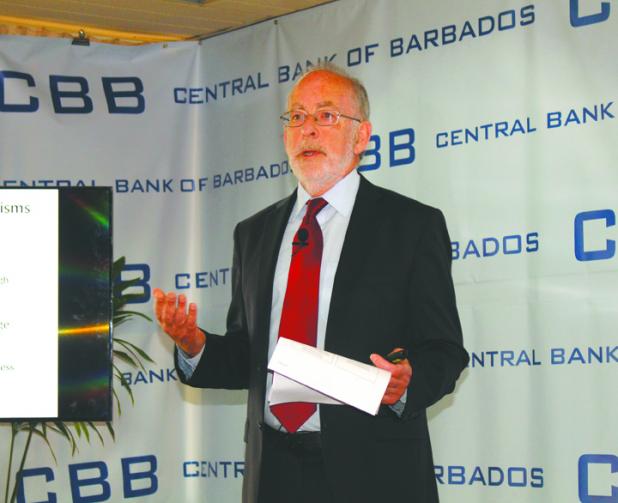 BE WARY OF FOREIGN AID

Former Governor of the Central Bank of Ireland, Dr. Patrick Honohan has issued a word of caution in relation to Barbados accepting foreign aid, from namely the IMF, as a quick fix to its present economic challenges.

Dr. Honohan, who helped to steer Ireland out of its worst financial crisis and who now serves as Honorary Professor of Economics at the Trinity College in Dublin, shared his views on whether or not Barbados should heed recent calls to seek aid from the International Monetary Fund (IMF), while delivering a presentation at the Barbados Central Bank yesterday.

He was there to present on the topic, “Recovering from Crisis: Lessons from Europe” and it was during the question and answer segment, that he expressed his views on whether Barbados needs more aggressive fiscal policies to better aid the country in recovering quickly from the global financial crisis and whether accepting help from the IMF, should form part of its recovery plan.

Dr. Honohan however stated, “It’s the country that solves its problems. It’s not outsiders. The last thing you want is somebody, whether (it’s) me or somebody from Washington who comes down and says, here, now I know what you should do, you should do this and this and this. Please do it quickly.”

“No! That’s not the way any country is going to deal with this problem. Why? Because any prescription coming from outside, will only be adopted half-heartedly at best or even worse, it could be said, since you are saying this and that, what does he know,” he added.

“Only the local people understand the economy…(and) there are various things you can do to deal with all of these problems. There are choices to be made and the choices are to be made by the government of Barbados, (in) consultation the people of Barbados. I think that is the only way to think of this,” he stated.

Recalling some critical advice someone once shared with him, he also shared it with the people of Barbados.
“Whatever you do, make sure what you as a country wants to do, before you go and try to get help from outside, because the outsiders will come with their plan and it might not be the plan you want. So if you’ve got a plan ready to go, then you will get help from outside,” Dr. Honohan advised.
(RSM)