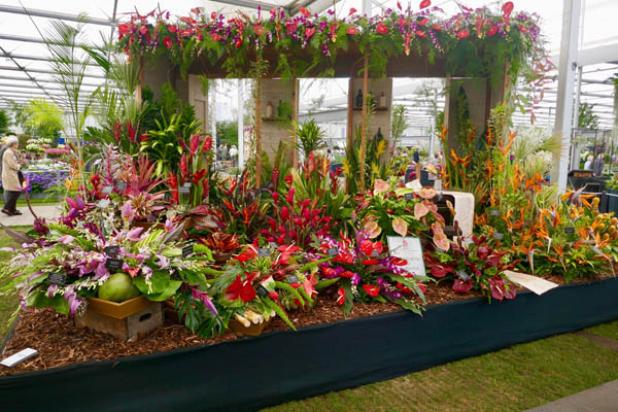 A view of the Gold-award-winning Barbados Exhibit. 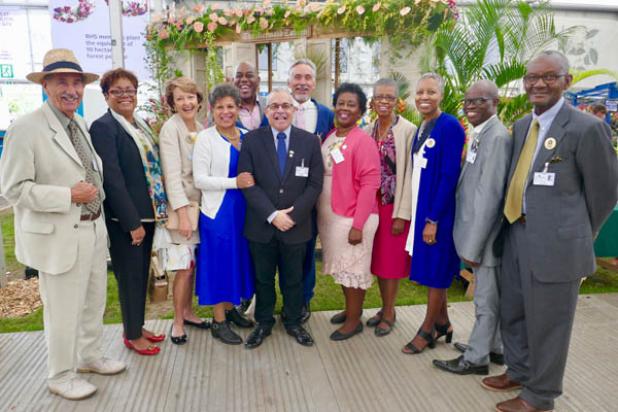 The exciting news broke yesterday that Barbados now has under its belt a total of 20 Gold medals, 11 Silver-Gilt and one Silver over the course of 35 years at the Chelsea Flower Show, over a remarkable 32 consecutive appearances.

In a press statement issued yesterday, it was noted that the high standard of the flowers and foliage used this year were exceptional, a remarkable feat given the recent dry spell in Barbados.

“The outstandingly high level of success consistently achieved by the Barbados Horticultural Society would be commendable at any level of competition, but it is truly exceptional in the case of Chelsea, which is widely regarded as the Olympics of the horticultural world with the highest and most demanding standards,” said the Miller.

In choosing this year’s theme, The Charter of Barbados 1652, the group knew they were setting themselves a major challenge to recreate that nebulous concept as an attractive floral display. However, embracing the mantra that every challenge represents an opportunity, they worked relentlessly to initially design and ultimately deliver a Gold Medal winning exhibit.

The team flew overnight last Wednesday, accompanied by 81 large shipping boxes, carefully packed with a vast array of blooms and foliage of all hues, shapes, sizes and textures, the team immediately got down to work on Thursday morning. After four days of relentless hard work and long hours, the display was completed late Sunday night, just in time for judging on Monday.

It was explained that the display is mounted on a 20ft x 20 ft standalone platform that allows visitors to walk around, the flamboyant floral display surrounds a wooden façade, made in Barbados by Anthony Roett, to depict The Mermaid Tavern in Oistins where the Charter of Barbados was signed, complete with a table and a replica of the Charter. A set of 3 open double-doors allow views of the beach area on one side and the land on the other. The land side features a blaze of reds and purples, created with Prince of Darkness, Volcano and Richmond Red Heliconias, Anthuriums, Stralitzia and Orchids, along with ‘flaming coal pots’ of Exotica and Crotons, and ‘market trays’ of Tropical Ornamentals such as Pink Pineapples and Purple Bananas. The beach area is a resplendent bank of magnificent pink and white Anthuriums and Gingers, orange Exoticas and River Salmon Heliconias, all delightfully finished off with a spectacular display of indigenous palms and coconut tree saplings. The vast majority of these plants were grown in Barbados, hand-picked and packed last week by society members and other volunteers, and then flown to London for the show along with the team.

Also recognised were the Barbados Tourism Marketing Inc, Virgin Atlantic and other corporate and individual sponsors whom have undoubtedly done an outstanding job of spotlighting Barbados to a massive British and international audience. In addition to the approximately 160,000 people who will visit the stand throughout the week, Barbados can benefit from the huge amount of media coverage that the Chelsea Flower Show attracts annually.