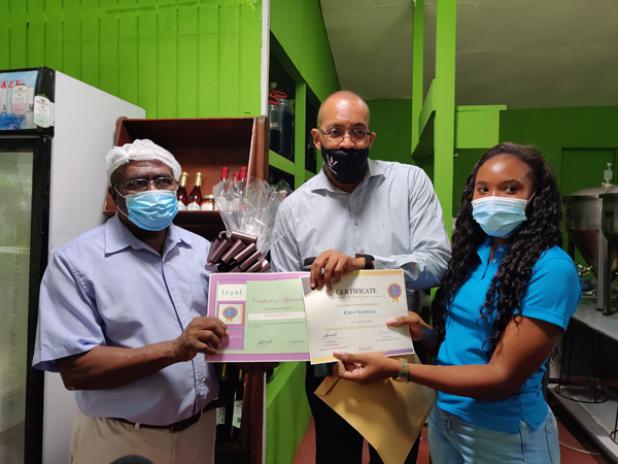 Ezra Marshall of Meadows in the Sun Wines receives his certificate from Minister of Energy, Small Business and Entrepreneurship, Kerrie Symmonds and BTFL official.

Some of the clients of the Barbados Trust Fund Limited (BTFL), had a heartwarming surprise on Wednesday when they were presented with tokens of appreciation by officials of the BTFL and Minister of Energy, Small Business and Entrepreneurship, Kerrie Symmonds.

The tokens, along with some certificates signaling the completion of entrepreneurial management training, were distributed to the Trust Fund clients during a customer appreciation bus tour on Wednesday. Minister Symmonds, along with BTFL General Manager Gerry Amos; Business Development Manager Kirk Dottin; and other officials from the Fund, interacted with the clients while they showcased their products.

Minister Symmonds in his remarks stated that the appreciation tour was to give back to the customers of the BTFL, who had been performing exceptionally well.

"There are about 3 100 or so members of the Trust Fund and people are surprised when they learned that a lot of those persons are very sincere and did not treat the Fund as a slush fund but an opportunity to develop and advance themselves as entrepreneurs and small business people. They are very diligent in the way they go about their business," said Symmonds.

The first stop was at the home of meat vendor Anastacia McDowall, in Holders Terrace, St. James, around 9:30 a.m. McDowall, who plies her trade in the Cheapside Market, said she was extremely surprised and happy for the gesture.

“I have been there for seven years. I started with my dad and then took over after, so it has been three to four years I have been on my own,” said McDowall.

The meat shop owner also thanked BTFL, saying that the organisation had been very helpful in keeping her going.

The tour proceeded to the home of beach vendor Angela Branch, at Roberts Road, Haggatt Hall, St. Michael and then onto the local winery, Meadows In The Sun Wines, managed by Ezra Marshall in Salters, St George. Meadows boasts of a wine list inclusive of 'Barbara', a sweet red; Moscatos, Chardonnay, Merlot, Sour Sop wine and unique dessert wines, along with cocktail specials. Marshall explained that his wine selections were a hit with both locals and visitors to the island.

Minister Symmonds thanked Amos of BTFL along with the BTFL Business Development Officers for the work done with the local entrepreneurs.

"It pains me sometimes as Minister to hear critics out there who only speak the language of throwing more and more money out there without us talking the language of how we can help to develop people and help them to build their business like Ezra has been able to benefit from," said Symmonds.

The minister highlighted that Marshall and others were able to complete the management course hosted by BTFL, which in turn aided in the development of their individual businesses.

Further south, the client appreciation team visited leathercraft vendor John Yard, at Lower Carters Gap, Christ Church. As with the wines during the earlier stop, the products were very popular with the BTFL team. Yarde creates shoes, sandals, bags, bracelets and other items for men, women and also has a line for children.

"This is the kind of work that we want to encourage Barbadians to come to understand is being done here in Barbados and as we go into Christmas, let us try to make this a Christmas where we keep Barbadian people employed," urged Symmonds.

The minister also highlighted that it would be meaningful for locals to support locals and give loved ones and significant others a gift from Barbados instead of spending foreign exchange. Yard thanked BTFL for the gift and for pushing him forward. He also said that he was grateful for the publicity the gesture afforded him and he hoped for a lasting relationship.