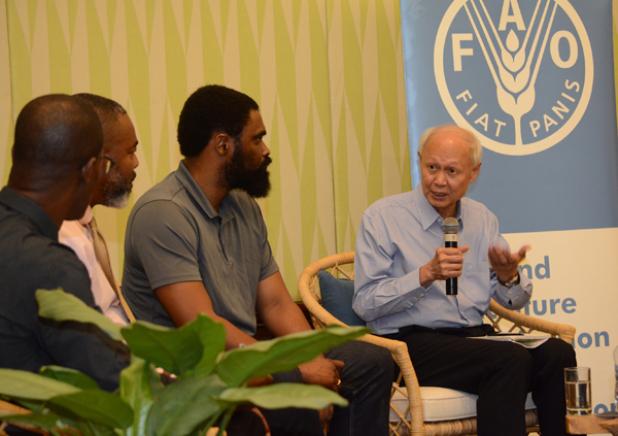 From left: Moderator, Stetson Babb; BNOCL Renewable Energy Officer and Advisor to the Minister of the Blue Economy, Mark Hill; and Lecturer in Finance with the University of the West Indies, Jeremy Stephen, listen attentively to a point made by Nanyang Technological University of Singapore lecturer, Paul Teng.

Economist Jeremy Stephen is in agreement with the view that Barbados needs to embrace managed migration in order to go forward.

He was a participant in a panel discussing prospects and pre-requisites for leveraging technologies to improve the competitiveness and sustainability of agriculture in Barbados and in the wider Caribbean hosted by the United Nations Food and Agricultural Organization at the Hilton Barbados on Thursday.

During the event, Paul Teng, of the Nanyang Technological University of Singapore on the topic ‘Innovative Agriculture in Small Island States: Lessons from Singapore’.

Stephen pointed out it was ironic the Singapore model was being hailed worldwide and Caribbean islands were looking to adopt it, when the model itself had been based on one, which had been developed in St. Lucia by Sir Arthur Lewis.

“Understand that where Singapore was in terms of population in the 1960s was around two million, while Barbados was around 250 000 and we are not producing children in a big way. Most of Signapore’s population then came from bringing people in - managed migration is what made Singapore catapult because they recognised that they could get a heavy low-skilled resource that could be trained.”

“So in terms of our resources, we have to acknowledge that we are where they were in 1961. We have a high level of unemployment that is not being guided towards returnable industries. Also we believe in the Caribbean, that industry must be kept until we die. I grew up hearing tourism is our business, after king sugar was dying out, we are still hearing this about tourism in 2019 when it has been proven more and more that the returns on that are out of our reach for the time being ... but Singapore changes its focal reach every ten years of so. We have not done this since 1982!”

The Lecturer in Finance with the University of the West Indies then pointed out the need for managed migration to push Barbados forward.

“Managed migration does not mean bringing in a whole set of low skill labour. It does not mean that. It also means that you divert your resources from the country into other countries and manage them appropriately like what South Korea has been doing since the 1970s. Israel’s agricultural base has its people going overseas, setting up agricultural businesses and bringing back the knowledge and utilising technology from Israel,” he explained, before pointing to potential opportunities for engaging in such practices in Guyana and Suriname. (JMB)