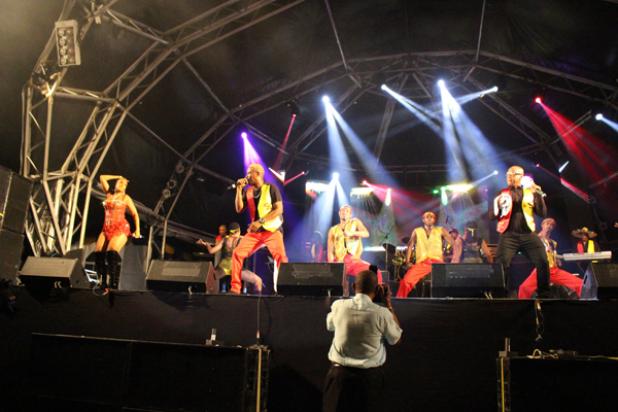 Square One in action.

Tue, 12/06/2016 - 12:00am
By:
Corey Greaves
Like cotton candy which melts in your mouth and leaves a sweet taste that leaves everyone wanting more, the Digicel Barbados Is Music show at Kensington Oval was absolutely mesmerising.
Keeping everyone gripped from the very first performance until the last one it was an amazing show which had patrons singing along and dancing from start to finish.
Coalishun with Rupert ‘Rupee’ Clarke, Terencia ‘TC’ Coward and Adrian ‘AC’ Clarke kept the crowd moving as they explored  songs together and as solo artists. This was enough to satisfy most people with songs such as Thundah, What Happens in De Party, Hot Sun and Riddim. Their journey showed their versatility and the pieces which were popular as they gave a bit of reggae before turning up the pace and ending their set, which consisted of almost 30 hits, on a high note with Ice Cream, Tempted to Touch, Nice Time and I Am A Bajan.
What was even more pleasing was how the Digicel Ambassadors came on in the transitions and kept the party moving and not allowing the energy level  Coalishun had left within Kensington after they sang some of their hits to drop.
Square One or as they are affectionately known, The Magnificent Seven was the next on stage.
With the Queen of Soca Alison Hinds, Anderson ‘Blood’ Armstrong and Cecil ‘O Shaka’ Riley, Square One also took the fans on a musical journey in a set which included three flawless custom changes for the entire band members, not just the lead singers.
The journey included the ‘In the Hotel’ then the ‘Club Circuit’ a drum solo by Winston Beckles and Friends which the crowd went crazy for as Ricky ‘Lil Rick’ Reed joined them on stage and sang ‘I’Z A Bajan’, ‘Hardwine’, ‘Ruff Winers’ and one of his first Calypso songs ‘Raggamuffin’. Also joining Square One was Peter ‘Ram’ Wiggins with ‘All O We’ and ‘Crop Over Good Morning’ and Michael ‘Mikey’ Mercer.
Kensington Oval reached boiling point when Square One finished off with ‘Foot and Fire’, ‘Roll It’ and ‘Faluma’.
If one thought that it could not go any hotter, Krosfyah led by the General, Edwin Yearwood and Khiomal Nurse added more fire to the mix and the explosion.
From the slow and groovy to the fast and party – at one stage Edwin slowed it down to serenade the fans but was in turn overwhelmed by the response as the people began to sing along in a truly amazing moment. He started over after asking the crowd to let him serenade them with his seductive vocals.
The Grass Skirt Posse was a hit and most of the members present and past joined Krosfyah on stage for Yardie, before Edwin froze the entire crowd in the Mannequin Challenge with ‘Sak Pase’.
They too had over 30 Hit songs which they performed on the night before Stedson “RPB” Wiltshire and Natalie Burke closed out the night with all three Bands joining them on stage for the final song.