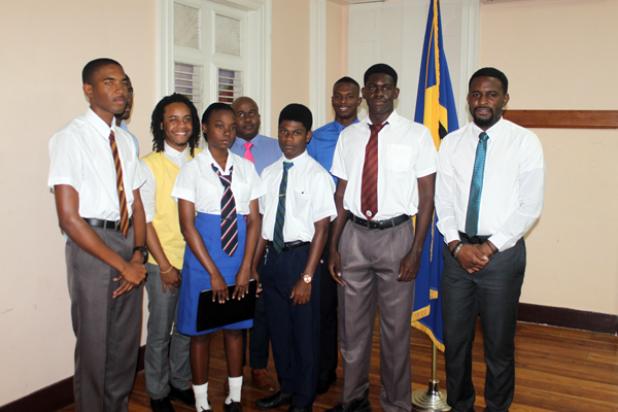 At the front, the four-member team: Harrison College’s, Daveed Gittens and David Johnson; Queen College’s, Nia Marshall; and The St. Michael School’s, Dia Parris, who will be travelling to Germany standing with other members of the Barbados Debating Society.

Thu, 04/14/2016 - 12:00am
Barbados’ flag will be flying high in Germany in coming months when members of the newly formed Barbados Debating Society participate in the World Schools’ Debating Championship (WSDC).
The four-member team comprises Harrison College’s, Daveed Gittens and David Johnson; Queen College’s, Nia Marshall; and The St. Michael School’s, Dia Parris. They will come up against representatives from 66 countries when the Championship comes off from July 19 to 29.
As explained by President of the Barbados Debating Society, Carl Applewhite this is the inaugural occasion that the Society, which has “15 students actively participating”, will be taking representatives to WSDC. The Society comprises students from different educational institutions from across the island. Prior to its existence, pupils solely from Harrison College’s Debating Society in the past represented the island at championships.
Applewhite also disclosed that it will cost $5 000 to send each team member to Germany. He further shared that each student’s school is responsible for assisting with raising the funds needed.
Meanwhile in his remarks, Public Relations Officer of the Barbados Debating Society, Joel Manning not only disclosed that it is the Society’s goal to see that organisation’s membership grow by leaps and bounds, but he also made an appeal to the local business community to help with fund-raising efforts.
“As you can well imagine, this is indeed an expensive undertaking and each school represented has engaged in and continues to engage various fund-raising activities to ensure that Barbados is ably represented. In addition, we are encouraging corporate Barbados to join in supporting these students as they stand to represent not just themselves or their schools, but their country, Barbados,” he added. (MG)