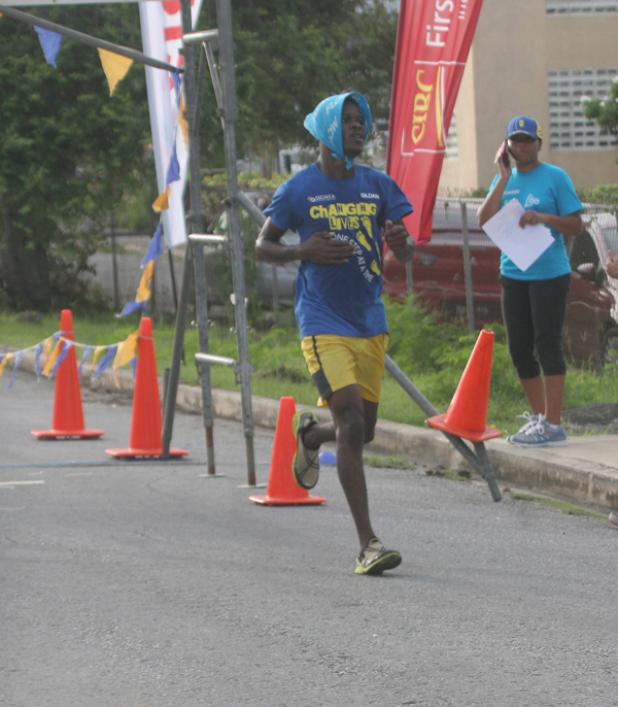 Winner of the Diabetes 5K run, Shamell Maynard, who finished in 20 minutes, 32 seconds.

Tue, 11/08/2016 - 12:00am
By:
Krystal Penny Bowen
Hundreds of Barbadians gathered in their blue shirts to participate in this years’ 5K walk and run for diabetes.
The event which started and ended at Warrens is part of the month of activities coordinated by the Diabetes Association of Barbados (DAB) and the Barbados Diabetes Foundation (BDF). According to the International Diabetes Federation, November 14 is recognised as World diabetes day and this year’s theme is “Eyes on Diabetes”.
President of the DAB, Noreen Merritt, gave a few remarks at the beginning of the event focusing on the importance of screening for diabetes and its complications as an integral part of managing the condition. During the event, the DAB with their mobile clinic gave free blood sugar and blood pressure checks in the car park of the Eunice Gibson polyclinic.
Title sponsor of the event, Massy, has committed a second year of support to the DAB and BDF and sought to double the 700 plus walkers and runners who attended the event last year. Public Relations Manager of Massy (B’dos) Ltd, Jennifer Branch said that this year, there was a registration of 250 Massy employees to the event alone. However, she did not have a final figure as to the total number of persons who had signed up.
The Barbados Advocate spoke to Marketing Executive of Agape Business Clinic and coordinator of the event, Romaine Lovell, who estimated well over 1000 persons were participating. He had mentioned that although the focus is diabetes, the walk was branded with the theme, “Life with purpose” as they were appealing to people with and without diabetes. The route for the event was centred around the Warrens and St. Thomas area; and the first runner, Shamell Maynard completed the course in 20 minutes, 32 seconds.
He was followed by Ackeem Rowe and Cabral Barriteau-Foster. The first child to complete the run was Noah Jordan with a time of 28 minutes, six seconds.