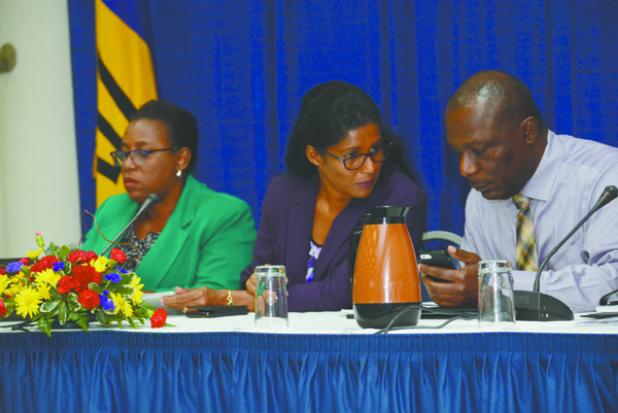 Barbadian farm labourers urged to stay out of trouble

WORDS of warning were given to participants of the Canadian Farm Labour Programme after marijuana plants were found growing on one of the farms last year.

During a local annual review meeting held at the Lloyd Erskine Sandiford Centre yesterday morning, Liaison Officer James Inniss gave a comprehensive overview of last year’s programme, including some of the challenges faced and feedback from some of the employers.

Inniss, during his report, told the group that in September marijuana was found growing on one of the farms on which Jamaicans and Barbadians were employed. “This is the second occasion such a thing has happened. The employer was very angry and held a meeting with Barbados Liaison Services and Jamaica Liaison Services,” he said.

The officer said that the employer was so incensed that it is still uncertain if the group of 15 farmers will be asked to return to work on that farm. “One of the things that concerned him the most was the processing plant is also on the property, which employs some 300 Canadian workers. His concern was in the event that somebody had notified the police and they had come and found the trees growing on the property, they could easily shut down the plant.”

He noted that while medical marijuana is legal in Canada, one must have a license. “Failing that and you are caught you will be prosecuted,” he warned.

Minister of Labour, Dr. Esther Byer-Suckoo, while delivering featured remarks, reminded the farmers that they are ambassadors for Barbados on a programme which is in its 49th year.

She noted that officials including herself speak highly of Barbadian workers while abroad, boasting of their skill and literacy level, hard work and good behaviour, and even point to the fact that a Police Certificate of Character is also required when Barbadian labourers are seeking employment on the farms.

“We are vouching through the RBPF that workers are of upstanding character. When we have workers who go to Canada, who break the law, then it looks bad on us.

“When you break the law in this programme, employers are within their right to send you back home. They run the risk of having their programme shut down if the law enforcement comes in and realises that marijuana is being grown.

“So if you had something like that happen with you, unless you can make the case that it wasn’t you and you can prove that case, as long as we have on record that you did such a thing in Canada or anywhere else that we may send you, we are not going to put you back on this programme anytime soon. It may be a long time coming. You may get a second chance, but not in any hurry.”

The Labour Minister also pointed to reports of fighting, which she said is not a matter which the employers are keen to have to address. She reminded that there is competition globally for these positions and when one group misbehaves, it doesn’t bode well for those who may be interested in the programme in the future.

Inniss also drew attention to lateness and failure to keeping quarters clean as areas highlighted by the employers.

All in all, the Minister said in spite of a challenging year, 173 Barbadians participated in the programme last year. The next group should be heading to Canada in March after the order for workers has been submitted. One of the farms, Nanticoke, was forced to close after the death of its owner, however those workers were absorbed into other farms. It was revealed that a vineyard in British Colombia has joined the programme.

The meeting also allowed the workers to be updated on changes which will include the 25 per cent no longer being deducted out of their salaries as stated by the Government of Canada. The Minister noted that out of this approximately five per cent would go to administrative fees, while the other would have been kept for other bill payments and even savings as directed by the farmers. The workers were advised that they would now have to do this themselves, including the payments to the National Insurance Scheme. (JH)