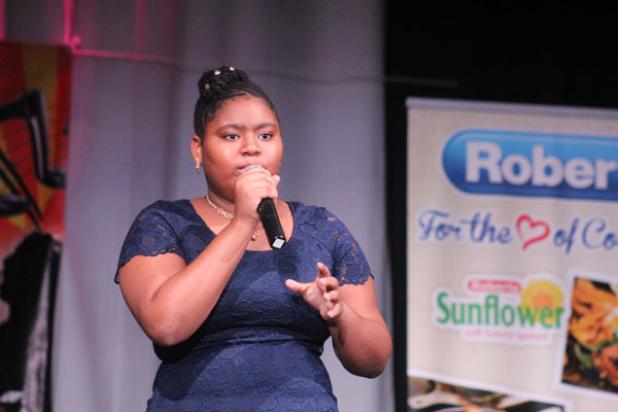 It was an evening of strong performances of local talent as the performers took centre stage for the evening during the second instalment of the preliminaries for the inaugural BAJE to the World Talent Show.

The first of its kind, this weekend’s leg of the competition was held at the St. George Secondary School, and saw a nice mix of very young, to much more mature performers vying for limited spots in future semi-final match ups.

Young Crayshanda St. Hill was first on the stage this time around, and performed a beautiful rendition of the Leonard Cohen acclaimed song, “Hallelujah”. Though she was small in stature, judges were very impressed with her vocal ability, and encouraged her to work on her audience interaction for future shows.

Francois Clarke took the brave step during his time on stage to perform the much beloved Tarrus Riley piece “Stay with You” in full a capella. Though his voice was clearly a powerful one, with him demonstrating control over his
vocals, his performance was not inspiring enough to get top marks.

Raheem Cox broke every sweat in his body with his solo dance routine of the evening. Though the performance was a tad long for some, no one could deny his skills in regards to his dance ability, and also his choice of backing songs to mix with his performance.

One of the most impressive performances for the evening, however, was Jamantha Cox with her powerful rendition of Jessie Reyez’s “Apple Juice”. Cox, who showed much confidence on stage well before she even sang the song was simply fantastic. Her delivery, emotions, and audience interaction were on full display as she serenaded the audience and judges smoothly with her raw talent. We fully expect to see her in the semi-finals when they come around.

Kareem Agard’s rendition of the song “Win” by Brian McKnight was also a crowd pleaser during the show; with him easily showcasing the mountain of vocal talent he has amassed over the years.

Unfortunately, last weekend’s show was haunted by numerous technical difficulties with the sound system, which clearly hampered a few of the performers as they tried their best to impress the judges. Here’s hoping for future shows having a smoother run for competitors.

The talent show moves to St. Philip this coming weekend with its prelim due to be held at Foursquare Rum Distilleries.