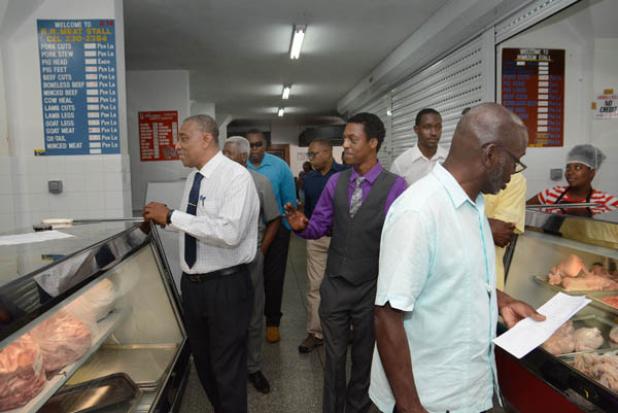 Businesses are already feeling the pinch of last month’s hike in bus fares.

As he and members of his team continued their ‘Face to Face’ tours yesterday, this time visiting the Cheapside market, Opposition Leader Bishop Joseph Atherley made it clear that vendors are complaining of a serious fall-off in sales, as citizens are finding it difficult to make purchases while paying bus fares of $3.50 per trip.

“In some instances, people complain that business has fallen off…and when we queried what they thought the reason was for that, repeatedly you heard the problem of bus fare. People are not paying bus fare to come; the cost of bus fare already adding to people’s already high cost, preventing them from buying fish to the extent they would have or even shop in the fruit and vegetable section, so the bus fare thing runs far more deeply than people in Barbados imagine,” he told the media.

“It is all right to talk about meeting your targets in terms of reducing your debt in a statistical way to satisfy the IMF, and talk about increasing your foreign reserves by access to borrowing from IADB, CDB and the IMF. This is where the rubber meets the road and the pain down here is real,” he stressed, describing the hike in bus fares as “a killer”.

Atherley noted the tours would help to shape a policy that responded to people’s challenges, explaining that this would be one of the main priorities of his new, soon-to-be launched political party.

He outlined that the team is also slated to visit the facilities of the Barbados Light and Power in the north and south of the island as well as the offices of the Fair Trading Commission.

“It is really an attempt to face off with people at all levels of business, the public sector and private enterprises,” he added. (JMB)