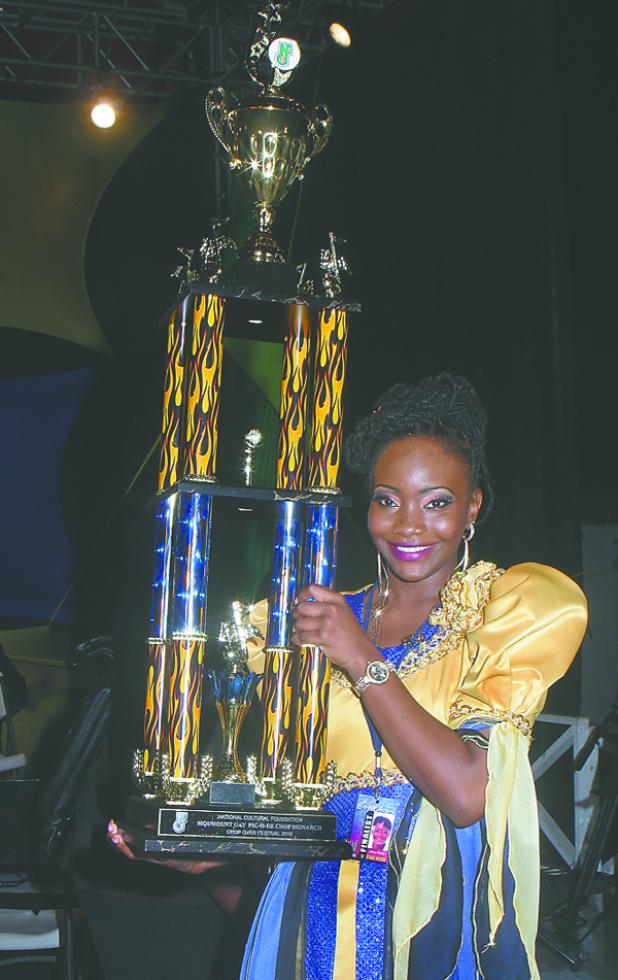 Queen Aziza as she basks in the moment of winning the Pic-O-De-Crop finals at the Kensington Oval on Saturday night.

Mon, 08/01/2016 - 12:32am
By:
Janelle Husbands
IT took almost three decades for Barbadians to witness another Queen of Calypso being crowned at the Pic-O-De- Crop Finals.
On Saturday night, thousands of Barbadians erupted in loud cheers and applause when Aziza Clarke of the All Stars Calypso Tent was named the winner, in a fierce competition in which many could only guess who would take home the coveted title as the results were being announced.
The 21-year-old, who amassed 114 points, ironically was not even born when Queen Rita took the title back in 1988. She will now go down in history as the youngest monarch in the history of Calypso in Barbados. Back in 2013 she was recognised as the youngest person to reach the finals, where she ultimately placed fifth.
Her historic win was by no means an easy feat as at least two of her male counterparts expressed in no uncertain terms during their performance that if a woman wanted to win, she would not be handed the title, but must be prepared to fight. And they did.
Aziza’s confidence was unquestionable in her first appearance on the stage, as she stressed the importance of persons giving respect where it is due in her rendition of Bring Back Respect. Undoubtedly she gained the judges’ favour during her second appearance on the stage, where she delivered a winning performance in the nation-building song One People, One Nation.
It was also a huge night for the other female calypsonians who  captured three of the top five positions in the finals. Chrystal Cummins-Beckles and crowd favourite Donella tied for fourth position with 84 points. Iweb, brought National Hero Bussa to life in his performance of Rights and later returned to pay tribute to local artists in Big Up, bringing legendary entertainers in their own right, Grynner, Richard Stoute and Trevor Eastmond, on the stage. Mr. Blood also gave the audience two solid performances to take position three with Female Monarchy and How to Get Away With Murder.
With the country’s gaze firmly affixed on its 50th anniversary of independence celebrations, the nation building theme was a recurring one, with costumes, backdrops and props predominately using the national colours of ultramarine, gold and black being used – to a large extent unintentionally blurring the performances because of the similarity in content.
Some of the standout performances however were Colin Spencer with Toilet Paper, which captured the imagination of the audience, many of whom walked with their own rolls of paper and waved during his performance. He returned with No Trussing in the second half. Defending monarch Classic was dressed as popular television nerd Urkel during his performance of Technology in the second half, where he urged persons not to lose themselves in technology. His first performance of War in the Alphabet, though cleverly written, proved to be difficult to follow with the speed of the performance. This, coupled with the flashing acronyms on the stage, were undoubtedly a distraction from the actual performance.
Several finalists utilised the large screens at the Oval for multimedia presentations and intros that in some cases were long-winded and arguably, unnecessary. A steady downpour with three performances left in the second half until the end of the show dampened the proceedings to some extent. This coupled with a wait for over an hour for the judges’ decision, saw a large number of persons leaving the venue before the winner was finally announced around 1:40 am. (JH)