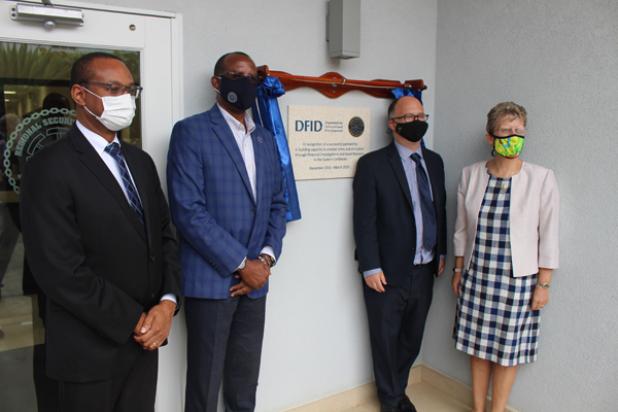 Standing by the plaque after its unveiling are Director of the Regional Security System’s (RSS) Asset Recovery Unit (ARU), Grenville Williams; Executive Director of the RSS, Captain Errington Shurland; Development Director for the UK team in the Caribbean, Stefan Kossoff and the British High Commissioner to Barbados and the Eastern Caribbean, Janet Douglas.

The Regional Security System’s Asset Recovery Unit (RSS ARU) is no longer a UK-funded programme. The Unit has been officially handed over to the RSS.

This occurred on Wednesday during a ceremony at the RSS’ headquarters. The handover was done by British High Commissioner to Barbados and the Eastern Caribbean, Janet Douglas, to Executive Director of the RSS, Captain Errington Shurland. A plaque to mark the bonds between the UK and the RSS in the field of financial investigation, money laundering in its seven member states was also unveiled.

In her remarks, Douglas noted that the RSS ARU “is a critical element in the fight against serious organised crime and corruption, as it helps to take the profit out of crime by ensuring that criminals don’t benefit from the illicit gains of their criminal activity”.

She additionally highlighted the Unit’s work over the years by stating its “capacity-building initiatives contributed significantly to the successful investigations by financial investigation units from across the Caribbean in asset recoveries for member states. This resulted in the restraint of over £100 million of assets derived from corruption or organised crime.”

He assured the ARU “will continue a pace with the momentum that we have had from the beginning” and the platform laid by its founding members will be continued by those presently at the helm.

Looking toward the future, Shurland said the RSS ARU is “currently working on a project with [the Caribbean Community’s Implementation Agency for Crime and Security] CARICOM IMPACS to develop a similar type of structure as currently exist within the Eastern Caribbean to have similar units for the other eight member states of CARICOM.”(MG)