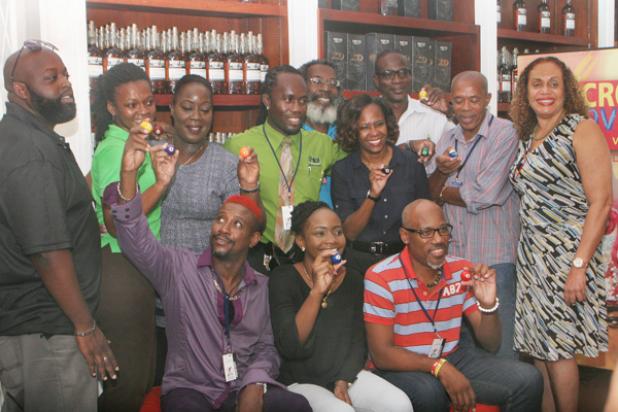 All of the entrants in this year’s MQI/Mount Gay Pic-O-De-Crop posing with the numbers that they drew.

Fri, 07/22/2016 - 12:00am
Anderson ‘Blood’ Armstrong will be the first singer out on stage on the night of the MQI/Mount Gay Pic-O-De-Crop event, which will be held at the Mecca of cricket, Kensington Oval.
Noting it was not the position that he wanted, Armstrong said: “...But I mean I am going to take the advice that I usually give most people who are in a show with me and they have to open the show or what, and that is to go out there and do the best that I can. As they say, I am not going to be the pace setter, I am going out there to set the pace, right? And when I go, everybody got to follow so you got to try to capture what I left out there and I am going to leave my all on stage.”
Armstrong pointed out that he is well prepared and he has made some changes to his songs, both musically and lyrically, and he has so much to offer with these songs that patrons would just have to come out on the night if they want to see exactly what it is he is bringing.
Meanwhile, Corporate Communications Specialist at the National Cultural Foundation (NCF), Simone Codrington, said that Aziza Clarke will be following Blood on the stage and the rest of the running order is as follows: Ian Webster, more popularly known as iWeb; Donella Weekes; Crystal Cummins-Beckles; Adrian Clarke; Adonijah Alleyne; Terencia Coward-Thompson, more commonly known by her stage name – TC, William Waithe, a.k.a. Classic; while Colin Spencer will round off the night. (PJT)