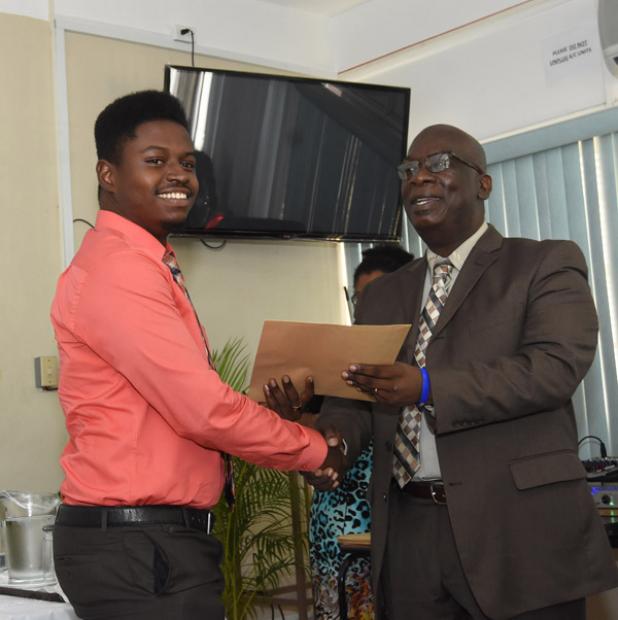 Minister of Education, Science, Technology and Innovation, Ronald Jones (right) presents Shannon Crichlow with the certificate for the primary school component of the Teachers’ Introductory Programme.

Sat, 07/30/2016 - 12:00am
Minister of Education, Science, Technology and Innovation, Ronald Jones says those expected to fill the 263 new teaching posts that have been created should start to receive their appointment letters from the Chief Personnel Officer (CPO) within the first term of the new school year.
In an interview with the media yesterday evening following the closing ceremony of the Teachers’ Introductory Programme, hosted by the Erdiston Teachers’ Training College, he indicated that all the preliminary work regarding the appointments have been completed from his Ministry’s end and have been sent to the CPO’s Office. These posts, he said, make up a portion of the over 700 new appointments of permanent and temporary teachers, of which 416 have been appointed in established posts and 100 into temporary posts.
In June, the Minister went to Parliament to have the Public Service (Teachers) Order approved to include in the teaching complement such posts as graduate teacher, special grade teacher and qualified teacher in the primary schools.
Noting that these posts are expected to fully satisfy the staff requirements for the school system, he said there are no plans on stream to create any additional positions. But, he highlighted, as persons retire from the system or move on, the temporary teachers will move into those posts.
“Those who are temporary now will not have many years of teaching so once they qualify they will move into the establishment, it is like a revolving door – persons reach retirement, space is created, persons move in. So you always have temporary posts, but then people keep moving through,” he said.
Minister Jones said that it took a long time to have the 416 previous temporary teachers appointed, but he gave the assurance that this should not happen again, as they are working to ensure that vacated posts are filled as quickly as possible. Speaking earlier during the closing ceremony, Jones urged the participants not now actively teaching to apply to Erdiston to pursue the four-year Bachelors of Education, as that programme of study could give them a competitive advantage.
“Yes I know money is important but training is also important and your chances would move from two per cent by the conclusion of this programme to 100 per cent in four years… Money is important, but based upon the philosophy that we are trying as much as possible to make teachers ready to be in the classroom, before they are in the classroom, you should do that,” he advised.  (JRT)