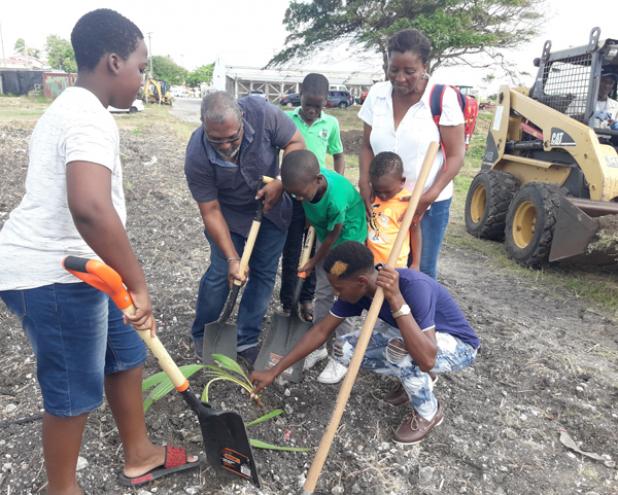 Minister of Agriculture and Food Security, Indar Weir assisted members of the 4 H- Movement with the tree planting exercise at the Barbados Agricultural Development and Marketing Corporation (BADMC), Fairy Valley Plantation, on Saturday.

On Saturday close to 500 trees were planted at the Barbados Agricultural Development and Marketing Corporation (BADMC), Fairy Valley Plantation, as government presses ahead with its major tree planting initiative of one million trees across the island by the end of 2020.

Minister of Agriculture and Food Security, Indar Weir was an active participant in the tree planting exercise, which brought together the BADMC team and members of the 4H-movement.

Enthused by the project’s progress thus far, he said, “I think when we are finished, at the rate we are going, we will probably end up planting more than a million trees given the fact that we started planting from November last year.”

In fact, Minister Weir told members of the media that BADMC was well-placed for the exercise, as it is tasked with managing the Farmers’ Empowerment and Enfranchisement Drive (FEED) programme aimed at reducing agricultural imports into the island which will ensure national food and nutrition security.

In a bid to tackle climate change, the Minister explained “Planting trees basically speak to how we respond to climate change, and we have been having this conversation for a quite a while on climate change – how we adapt, but equally how we mitigate. And all of us know what has taken place in the Caribbean in recent times with climatic conditions and climatic events.”

“I believe that if we are to understand what is taking place in climate change, then all Barbadians should feel responsible for participating in this programme, simply because it is our way of responding to global warming…. We get more drought conditions than we previously had, Barbados is basically rain-fed agriculture and it is very important that we plant these trees because if it is going to bring back more rainfall, then we need that.”

“Also, we have to feed ourselves and my Ministry has responsibility for food security. Therefore, given the fact that we have committed with the FAO to the Parliamentary Front against Hunger (PFH) where we change the way children eat food, but equally we send a strong message to all Barbadians that there is a healthier, more wholesome way to eat, then we must be able to provide that food,” he said, pointing out that emphasis will be placed on fruit trees.

Moreover, cognizant that some Barbadians have expressed concerns about the tree planting during the drought season, the Agriculture Minister has given the assurance that the project has been well thought out.

“I had very in-depth conversation with a team from the Caribbean Institute forMeteorology and Hydrology and we have looked at rainfall patterns for this year. We know traditionally that we have a dry season in Barbados and also know that there are trees that have a drought tolerance, and those are the trees that we are targeting at this particular time,” he explained.

“While it is true that people may express some concern or some reservation – this is highly scientific, its not just planting a tree. So, the trees we are planting, while they have a high drought tolerance, we also have been able to check to see that we are able to get rainfall intermittently during this time as well.”

“So, the process now is slow because if you look at the target for the tree planting we are supposed to be planting over 2000 per day, we are not doing that at this time because it wouldn’t make sense. But, then when we get into the rainy season we will make up for those that we weren’t able to plant,” Weir added. (TL)