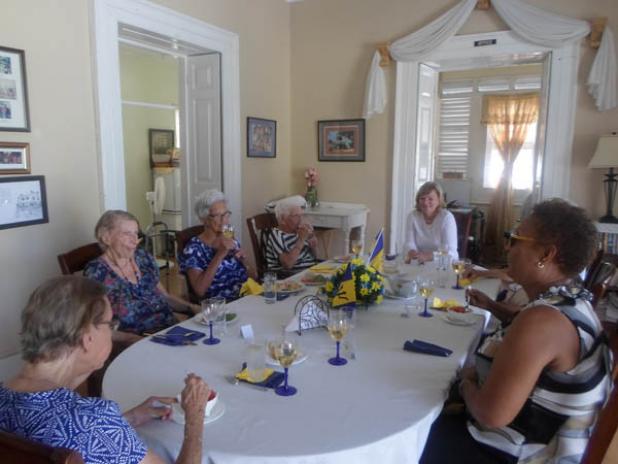 Residents, board of trustees and benefactors enjoying a Bajan lunch at Almair House.

Fri, 11/11/2016 - 12:00am
One of the oldest assisted care institutions treated their nine residents, board of trustees and benefactors to a true Bajan lunch for the nation’s 50th anniversary recently.
It was a time to see old friends, chat about the many changes of the Barbadian society and landscape and reflect on the momentous raising of the Barbadian flag on Garrison Savannah in 1966.
In 1916, the Almair Home which was first established as a “home for respectable and deserving ladies who in their old age are alone and destitute and without means of supporting themselves’’.
The home is located in “Banavie”, 4th Avenue Belleville, in one of the original structures which was once residence for the elite class in Barbados. However, according to Trustee Dorothy Williams, this was not the original location of the home as it was operating in Pinfold Street many years ago.
President of the Almair Home, Jean Kerr, spoke about her involvement in Almair and the operations of the institution. She said that the Almair can accommodate approximately twelve individuals and currently there are nine residents there. Kerr explained that Almair is a registered charity.
Long time benefactor, Gloria Mendes who attended the luncheon spoke to The Barbados Advocate about her relationship with the home as well as the history of her family and the Belleville area. She is also a regular guest at the home’s celebratory gatherings such as their Christmas parties and has become a part of the family.
In the past, Kerr said that around independence, they would arrange transportation for the residents to see the lit and decorated roundabouts, an activity which they enjoyed thoroughly. In 2017, the Almair home will be celebrating 100 years of providing alternative living for those who wish to have a degree of freedom, while not living in a senior citizen’s facility.