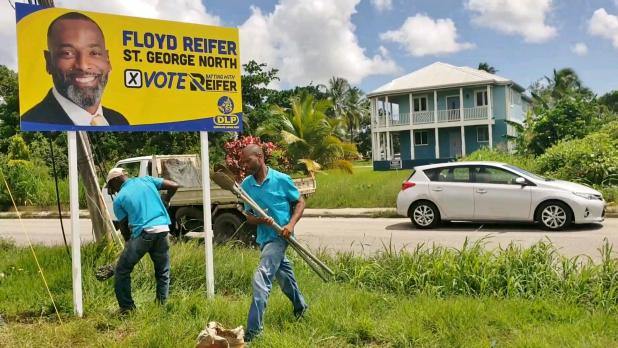 Billboard erected for Reifer: The Barbados Advocate was able to capture workers erecting a billboard for Floyd Reifer, Democratic Labour Party candidate in the upcoming St.George North by-election, on location at the Salters junction in St. George yesterday, as Reifer presses ahead with his “Batting with Reifer” campaign.

Alleyne: Reifer can make a difference

The residents of St. George North are being told that there is a wind of change blowing across Barbados and it is not too late to get “that voice” in the House of Assembly that is needed at this time.

That’s the view of the former Second Vice President of the Democratic Labour Party (DLP), Simon Alleyne. He was speaking during a spot meeting at Flat Rock, St. George on Thursday night.

Alleyne made the point as he maintained that this country’s leaders must be held accountable to the people. He charged that too often they are saying what they like and doing what they like to the detriment of the society, particularly those in the lower and middle classes.

“It is very important that our leaders are held accountable to us, but we are hearing a lot of talk about big words and we were given a challenge recently that if you want big works you have to deal with me... but you know what the biggest works are? You the constituents of St. George going on November 11 and voting for Floyd Reifer, that is the biggest work y’all guys can do for yourself,” he stated.

He continued, “They are doing as they like, but I am saying to you this evening as you are hearing my voice, that Floyd Reifer is the man to make things better, to be your voice, to mobilise on your behalf, to agitate on your behalf and make a change for the better in St. George North.”

Alleyne told the constituents, to make that happen, the DLP needs their support and he urged them to vote for Reifer on November 11.

“We can’t do it by ourselves and that’s why Floyd is out here working, that’s why we are working with him, because we believe in him and what he can offer and what he can do for you the constituents in St. George North. So stand with us November 11, stand with us and vote for your children, vote for your future, vote for improvement in the quality of life for yourself and your family by giving you support, by giving your X to no other than Floyd Reifer,” Alleyne stated.