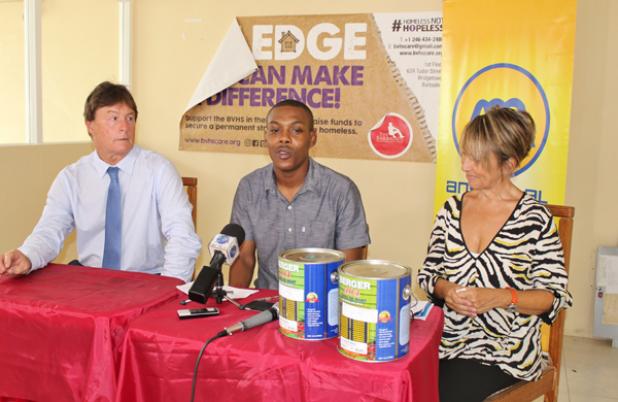 Founder and President of the Barbados Vagrants and Homeless Society (BVHS), Kemar Saffrey (centre), gives an update on the new homeless shelter. Looking on is Judith Wilcox (right), Head of Customer Experience at Ansa McAl and Stephen Jardine, Partner with PricewaterhouseCoopers. 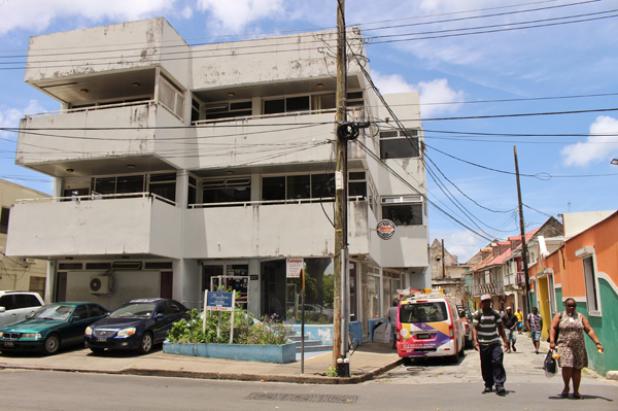 A view of the new shelter, which has to be retrofitted ahead of the grand opening in October. The three storey building is located in Spry Street, Bridgetown.

All hands on deck

By the end of September, the Barbados Vagrants and Homeless Society (BVHS) wants to have its Homeless Shelter in The City fully retrofitted ahead of its grand opening on October 20th and as such, is welcoming all the support it can get in sprucing up the building.

Founder and President of the Barbados Vagrants and Homeless Society (BVHS) Kemar Saffrey met with members of the media yesterday at the new shelter, where a press conference was held to bring awareness of the much needed funds and tangible support that BVHS is currently seeking, in order to retrofit the building and carry on with its rehabilitation programmes.

The new shelter is located in Spry Street, Bridgetown, just opposite the Central Bank (where Gems Travel Agency is at present). The three storey building, will consist of administrative offices on the ground floor and housing quarters for women and children, as well as men, on the second and third floors respectively.

“We are in the process of looking to raise just about $100,000 to retrofit the building. We had a $260,000 price tag on this building in terms of retrofitting it, but successfully, we were able to get it down because of the kind support of people like PricewaterhouseCoopers and the Ansa McAl group. So we are really appreciative of what we have seen here – the assistance that was given,” Saffrey indicated.

“So this building is slated to house about 80 persons, to basically get them off the street, both women and children and men. Now we can appreciate that in Barbados, wherever you look, there is no female shelter, only a shelter for abused women. But if you are a woman that becomes homeless, and you have children, you would be facilitated in a shelter like this,” he added.

“So we are happy to announce that we have our shelter, after fighting for ten years to be able to get to this stage. It didn’t come overnight. This came plea, after plea, after plea. So we are glad that we can partner with the Maria Holder Memorial Trust, PricewaterhouseCoopers, the Ansa McCal group and a number of other organisations and companies to facilitate this. We also have support coming from as far as the United States of America, sponsoring all of our beds, over 80 beds. So we have people flying in from overseas, just for the opening. They think it is a really big deal,” he stressed.

Saffrey is meanwhile appealing to members of the public who can give either financial support or even tangible support, to assist in the retrofitting of the building, before the close of the month.

“We need the support. We need to get persons that have carpentry skills, masonry skills, those who are willing to come and do some painting, those who have wrought irons skills. We have until the 30th of this month to get everything going, so we can have enough time to pass inspection. But we have already been approved by a lot of the key agencies, including Town and Country Planning, so we can rebrand this building from an office complex to a residential property,” Saffrey commented.