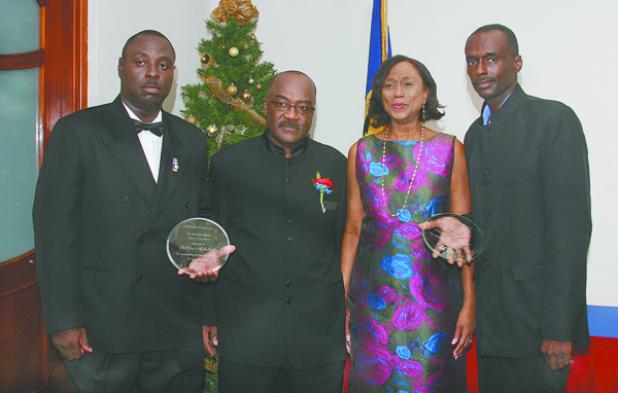 Marlon Small (left) and Terry Griffith (right) were presented with the Chief Fire Officer’s Award. They are pictured here with Chief Fire Officer, Errol Maynard and Permanent Secretary in the Ministry of Home Affairs, Gayle Francis-Vaughan.

Sat, 12/10/2016 - 12:00am
By:
Peta Rowe-Forde
During the Barbados Fire Service’s (BFS) recently held awards ceremony at Accra Hotel, Attorney General and Minister of Home Affairs, Hon. Adriel Brathwaite congratulated the department  for their outstanding progress for the 2015-2016 year.
“You guys must be congratulated. I, like many Barbadians, feel much safer knowing that you are there to respond,” stated Brathwaite.
Pointing to the 2015 Annual Report, the AG acknowledged that while the Fire Service did not accomplish all it had set out to do, there is still much to be celebrated.
The Minister highlighted the demonstration performed in Bridgetown a few weeks ago by the BFS, which displayed the capabilities of the Fire Officers. He also made mentioned that the BFS was the recipient of a new tender during this year, in keeping with the promise to replenish the fleet over a period of three years.
Brathwaite noted that the first set of vehicles has arrived and he expects another two soon.
The Minister noted, “We have trained approximately 10 fire officers. We are seeing a high level of interest in fire-fighting. I believe to date not only have we trained the 10, we have about another 75 applicants...people are becoming very interested in what we do.”
As the Minister closed, he thanked the BFS for their participation in the Independence parade and offered congratulations to the Chief, management and staff for a quiet but productive year.
“In any organisation you will never have perfection but to date I will say congratulations. We have a relatively quiet industrial climate…we spend more time at work than we do at home, so therefore work should always be a place that people want to come, and I charged the Fire Chief and I charged the management of the Fire Service to ensure that people look forward to coming to work… And I think these men and women enjoy coming to work.”