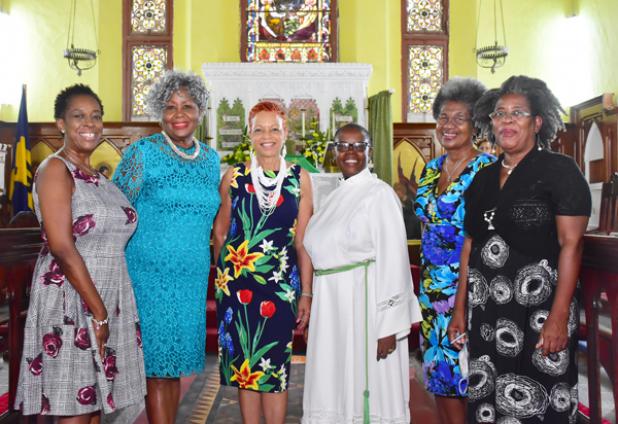 70 years of love and service

Yesterday, the milestone was commemorated with a service at St. Paul’s Anglican Church, where the not-for-profit organisation held its first meetings.

The Reverend Erma Ambrose, who proudly admitted to being a beneficiary of the ‘Y’, applauded members for their continued commitment to providing programs and services through which women and girls can develop their potential – spiritually, intellectually and socially.

“I speak of the era when they operated in Country Road. It was there where I honed my skill of needlework – I can actually cut a flair and straight skirt and put in a zip… So, thank you to the YWCA on behalf of myself and behalf of so many others who continue to be motivated and who continue to be educated by this organisation,” she expressed.

Moreover, the Rector of St. Paul’s insisted that hospitality and friendliness is what the world needs. She therefore made a passionate plea to Barbadians to lift up one another.

“We need to do so because our world is struggling,” she asserted.

“We have to see what we can do to build God’s kingdom here on earth. And things that we count to be important in this world like championships, jewellery, titles, money, status and our connection – none of these things matter when it comes to eternity because we will all have to give an account of our stewardship.

“As Christians, as members of YWCA, the power of change in our society is critical. We need to heal our world one person at a time and it is not an option; it is not an extra option – hospitality is at the heart of the gospel message,” Rev. Ambrose said.

President of the YWCA of Barbados, Margaret Pollard, recalled that had it not been for a concerned mother who wrote to The Barbados Advocate in June of 1950 under the column “Our Readers Say”, the organisation probably would not be celebrating this month.

“She expressed her dissatisfaction for the little that was being done for young girls and women and wanted to see them taking part in meaningful and wholesome activities,” she indicated.

“Of course there was no ‘Down to Brass Tacks’ for her to complain to, but as they say, ‘the Pen is mightier than the Sword’. This mother used what means she had and of course her letter got an overwhelming response from some very prominent women of the day. Women such as Mrs. A.A. Gibbons, who was elected as the first President, Mrs. H.A. Talma, Mrs. Donald Wiles, Mrs. A.W. Scott and Mrs. F. Goddard, in addition to a number of social workers who were invited to the first meeting. Those were the persons who gave a rebirth to the YWCA 70 years ago this month.”

The YWCA has impacted the lives of the Barbadian society in many ways. Courses on offer have included QuickBooks, Makeup, Dressmaking, and CXC Maths. In addition, there is a breakfast programme currently feeding just over 100 primary and secondary school children during the school term from Monday to Friday; as well as a Reading Club for children between the ages of 5-16 years old.

“I wish to give thanks to our heavenly Father for all the blessings He has bestowed upon this organisation for these past 70 years. To the memory of all those women who have faithfully served the ‘Y’ and are not with us today in the flesh, and to those who are still serving, I wish to thank you for your time, your invaluable support and your strength,” Pollard said. (TL)