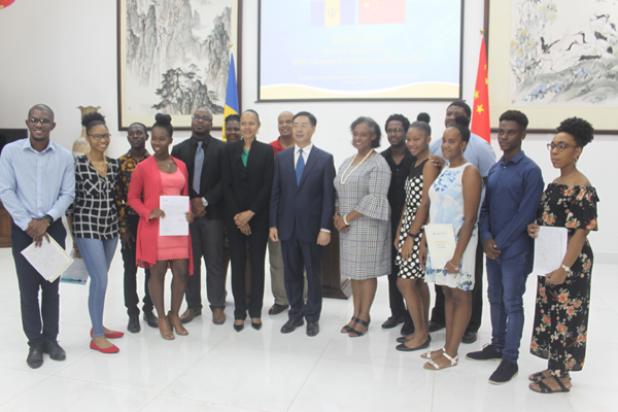 Education Minister, Santia Bradshaw; Permanent Secretary of the Ministry of Foreign Affairs and Foreign Trade, Simone Rudder; Senior Foreign Service Officer, Kendra Holdip; Co-director of the Confucius Institute of the UWI Cave Hill Campus, David Bulbulia; and the Ambassador to the People’s Republic of China in Barbados, Yan Xiusheng, with the 11 awardees of this year’s Chinese Government Scholarships.

Eleven Barbadians have been granted Chinese Government Scholarships to pursue undergraduate and postgraduate studies in the People’s Republic of China.

This year’s recipients are among the “more than 90 Barbadian students” who have been given such scholarships over the years to study at universities in China.

Ambassador to the People’s Republic of China in Barbados, Yan Xiusheng, disclosed this while addressing last Friday’s official reception for the awardees of the 2019-2020 Chinese Government Scholarship at the Chinese Embassy.

The Ambassador also stated that since its establishment in 2015, “the Confucius Institute has provided Chinese language and cultural training to more than 6 000 Barbadian people”. He further said that six students, who are the “second cohort of software engineering students from the University of the West Indies (UWI), will shortly be heading off to China to complete another two years of studies in China Institute of Information Technology”.

“For this year’s awardees, I sincerely hope that you can gain achievements in your academic study and in the meantime, I hope you could also know more about Chinese people and Chinese culture and history just as the last several cohorts of Barbadian awardees which have done very good in China. Also, hope that you can become the envoys to sow the seeds to promote the educational, cultural and people-to-people exchanges between our two countries.”

Minister of Education, Technological and Vocational Training, Santia Bradshaw, was among the attendees at the reception. In her address, she urged the awardees “to cherish this experience and make full use of all available avenues for growth and to thrive. Immerse yourself in the culture of China and indeed, it is a rich and glorious culture and heritage that China has to offer. This will enable you to improve your world view and certainly, aid you in your overall development and in turn your own national development as well.”

She reminded the awardees that they will be performing “a fundamental role as an ambassador for Barbados which involves building bridges of friendship and understanding between Barbados and China.” Therefore, they should share aspects of Barbados’ heritage, cuisine, language and background whenever they can along the way.