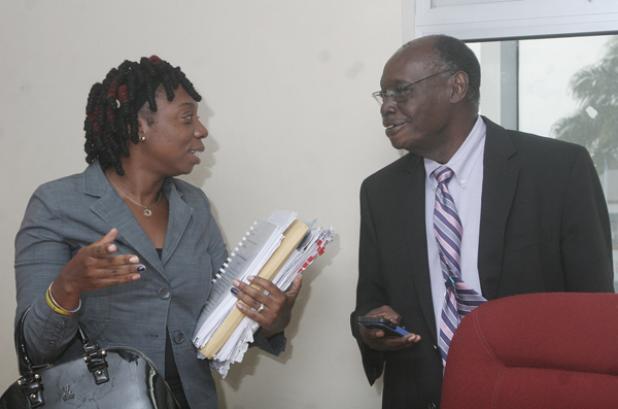 General Secretary of the BWU, Toni Moore (left) conversing with her counsel Edmond King (right) after the Tribunal Hearing. 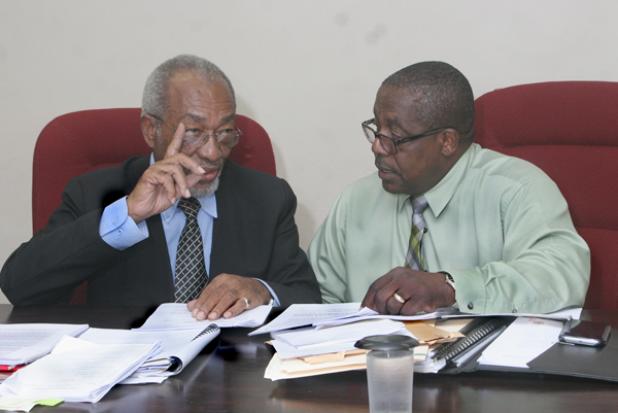 Sun, 05/15/2016 - 12:00am
By:
Peta Rowe-Forde
After the last pieces of evidence were taken at the tribunal hearing, reinstatement or substantial compensation were the two remedies put forward by counsel of the Barbados Worker’s Union (BWU), Edmond King during his final submissions at the tribunal on Thursday afternoon.
King stated that the respondent did not satisfy the tribunal that the reasons for dismissal were not unfair. Moreover, he stated that the employer chose to determine the dismissal as the result of redundancy which he did not say or suggest in the letters of dismissal. In King’s view, redundancy cannot be implied or inferred but has to be clearly and explicitly stated. He went on to say that the commission is relying on a “hypothetical” redundancy; and so, the reasonableness of the employer should be tested.
It was on this note that King called for reinstatement for Mr. Chase and if it is not practicable, he requested substantial compensation. Chairman of the Tribunal Hal Gollop cautioned King that the remedies can only fall within those outlined in the Employment Right Act and while compensation is an option, substantial compensation is not.
In response, counsel for the National Conservation Commission (NCC) Mitch Codrington, charged that what happened at the commission was in fact an economic redundancy where the finances could no longer sustain the organisation. He indicated that the law gives some leverage for such a concept and regarding the reasonableness of the employer to dismiss workers, Codrington quoted, “When the bigger bosses say you have to cut, you have to cut.”
Furthermore, Mr. Codrington stated that it is a fallacy of misplaced concreteness that the lack of making the word ‘redundancy’ as a part of their dismissal letter is an indication of unfair dismissal. He stated that the Cabinet paper itself implies the term in its documentation and with regards to the list that the BWU requested, the Act mandates that it should contain the numbers and categories of only those employees who are being dismissed. This means then that NCC was under no obligation to provide the complete list of all workers that Sir Roy Trotman requested.
Sir Roy Trotman also made accusations that the statutory requirements of consultation were not complied with and Codrington outlined that there was a collective agreement. When Chairman Gollop pointed out that a collective agreement was not enough, Codrington was unable to respond further.
Moreover, Codrington posited that NCC was legitimate in its actions and does not believe that any compensation since 2014 should be the responsibility of the NCC. Nevertheless, when Codrington was asked moments later about the remedies he suggests, he was not forthcoming with an answer; indicating that he does not understand what the tribunal wants from him. He maintained that the issue of parity and having people belonging to two unions should have been solved a long time ago. Chairman Gollop asked that he kept the two suits separate.