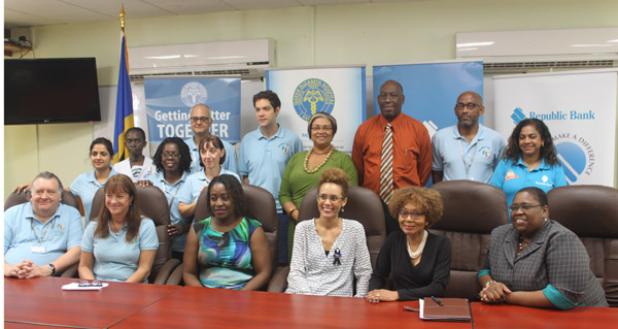 Sat, 11/19/2016 - 12:00am
THE Queen Elizabeth Hospital (QEH) has had two successful kidney transplants performed there during the past week.
Consultant Surgeon at the QEH, Dr. Margaret O’Shea, made this disclosure at yesterday’s press conference held in the QEH’s boardroom. She stated that the surgeries were done on Tuesday and Wednesday by the team from Transplant Links Community (TLC), who was assisted by the QEH’s team.
Speaking about the surgeries, Chief Executive Officer of TLC, Dr. Jennie Jewitt-Harris, said both patients were doing well, but it is early days yet. She further disclosed that both surgeries “were live donor transplants where a relative gives a kidney to their loved one who has kidney failure. The technique that has been used this week [and] that has been demonstrated by the TLC surgeons is a keyhole surgery technique, which takes the kidney out of the donor and means that they can go home soon”.
She lauded the QEH staff and Republic Bank for the sponsorship provided. Dr. Jewitt-Harris also thanked members of TLC’s team who, she shared, gave up “their own time, their holiday time free of charge to come here and to help share their skills and do what they do best”.
Noting that “skill transfer is absolutely at the heart of what TLC is about”, she additionally spoke of plans to further work with the QEH and share their skill as well as transfer their knowledge to the hospital’s staff.
“The QEH and TLC teams will continue to work together over the next couple of years – two or three years – to continue the skill transfer and teamwork to make this a sustainable project that is available to all patients in Barbados with kidney failure.”
She continued, “Kidney failure is actually a big problem in Barbados. It is actually a big problem worldwide but there is a special problem in Afro-Caribbean countries where there is a lot of high blood pressure and diabetes. So there is an enormous need here to have this programme.” (MG)