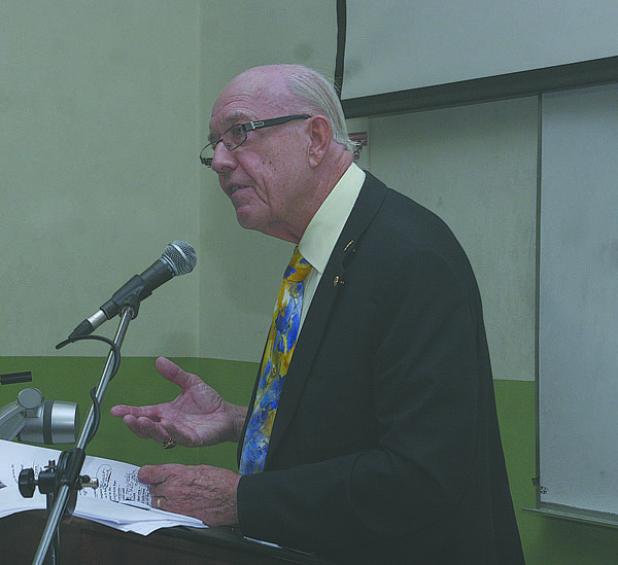 Professor Emeritus of the University of the West Indies, Sir Henry Fraser,
delivering the public lecture.

‘NO NEED FOR NEW HOSPITAL’

Thu, 11/10/2016 - 12:00am
QEH built to last over 100 years, says Professor Sir Henry Fraser
THERE is no need for a new public hospital in Barbados.
This is the view of Professor Emeritus of the University of the West Indies, Sir Henry Fraser, who was delivering the final public lecture in a series hosted by the Faculty of Medical Sciences in recognition of the 50th anniversary of Independence.
It was held under the theme “Health Care in Barbados: The Pestilential Past, Problematic Present and Future Prospects.”
Speaking at the Cave Hill campus on Tuesday night, Professor Fraser contended that in the words of the architect of hospital Captain Kenneth Tomlin, the facility which was constructed in 1964 was built to last 100 years or more.
He told the large audience in attendance that there are several reasons why Barbados does not need a new hospital, particularly the fact that the country can’t afford it at this time. Sir Henry lamented that the plant has not been properly maintained over the past five decades.
“Our problem is not in the building, but in its maintenance, morale, equipment and shortages of staff and supplies. These are the problems that bother people and lower morale. Let’s acknowledge the facts and do what is needed rather than building political castles in the air,” he exhorted.
Looking at the issue of financing, he said a realistic option would be the introduction of a health levy.
“There is a huge gap between what we want to supply and what we want to accept and the money for it. It would be like the Drug Service levy of the 1980s readily accepted, but it must not go into the Consolidated Fund. As Dr. [Dexter] James said in his lecture recently. The Social Development Tax that’s a problem... still not fully resolved, must not go into the Consolidated Fund or it will not produce the benefits that have been claimed for it. It must be managed like the National Insurance Scheme perhaps by a unit in the Ministry of Health. It is the only practical and realistic solution if we are to solution our financial issues,” he maintained.
He stated that a study of the hospital in 2005-6 puts the cost of adding a state-of-the-art block to the north of the QEH and refurbishing 80 per cent of the rest at some $500 million, and a new hospital with less beds was estimated to be $680 million.
“As (former) Minister [Jerome] Walcott said repeatedly to PAHO and the consultants, we are talking restoration not a new hospital. Those consultants best option was the state-of-the-art new block. It would be on the car park, bridged to the Lion’s Care Eye Care Centre at every level, and with basement parking. It would house all the new high tech ICUs, and it would serve initially to decant the hospital wing by wing in order to refurbish each wing,” he explained.
He said another option put on the table was the demolition of 80 per cent of the hospital or converting it into offices, and building a huge new hospital across Martindale’s Road, blocking the traffic for a 80 per cent new building to the east. “Making the hospital almost impossible to operate for the six years estimated it would take to build it,” he lamented. (JH)