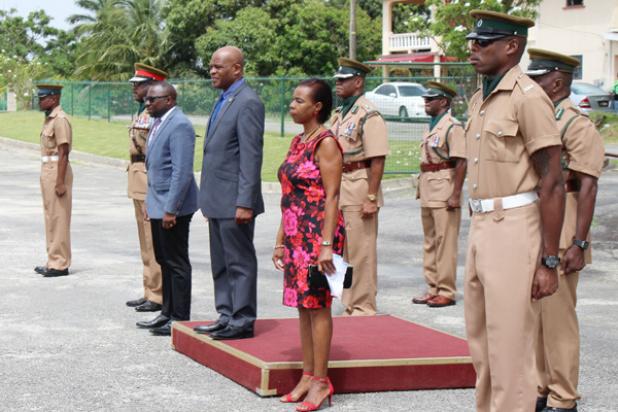 ‘GIVE THEM A CHANCE’

TO err is human.

This is a reminder to all Barbadians from Minister of Home Affairs, Edmund Hinkson, as he made a call for ex-offenders to be given a second chance when they re-enter the society having served their time in jail.

Delivering remarks at a service held to celebrate the 12th anniversary of the Barbados Prison Service yesterday, Minister Hinkson made a call for Corporate Barbados to come on board, while stressing that Government also has a role to play in this equation.

He noted that this would coincide with the Prison Service’s anniversary celebrations, “Breaking Down Barriers. Fostering Relationships”.

“We as a Government believe that a concerted effort must be made to break down any barriers for inmates’ rehabilitation and their successful reintegration into society.

“Please give them a chance to be gainfully employed. We have a system in Barbados whereby a Police Certificate of Character is required for probably 85 per cent of the jobs which are available in the society. This is something which we perhaps have to look at as a government, as policymakers. Because you have to give people a second chance.

“We all ask for second chances, whether it is in our personal relationships or public life. Whatever, we are only human. To err is to be human, and the main barriers to successful integration into society of persons include unemployment, include issues of housing, and include issues of family support which we ask for as well. We encourage families of ex-offenders to give them a chance. They need your support.”

He said that the prison’s rehabilitation staff would be willing to meet with members of Corporate Barbados and families to share information and assist in building relationships.

“They have made mistakes. I am confident that if given a chance with appropriate support mechanisms, most can and will change and contribute in a positive way to our society.”

As it relates to Government’s role, he drew reference to the $5 000 Trust Loans that fall under the Ministry of Small Business which is headed by Minister Dwight Sutherland, who also attended the anniversary service, which was held at the Ellerton Wesleyan Holiness Church.

“...To give them a start in terms of their business acumen, of helping promote businesses that are already started. This is a primary situation where the State can help ex-prisoners ... not only in terms of the Trust Loans, but in agricultural incentives.”

Pointing to the agricultural programmes currently taking place at the prison, Minister Hinkson said, “...The Ministry of Agriculture must be asked to intervene and make available the many incentives in terms of agricultural development to ex-prisoners. Sometimes we have to do away with the red tape and bureaucracy that on many occasions hinders government policy,” he said. (JH)