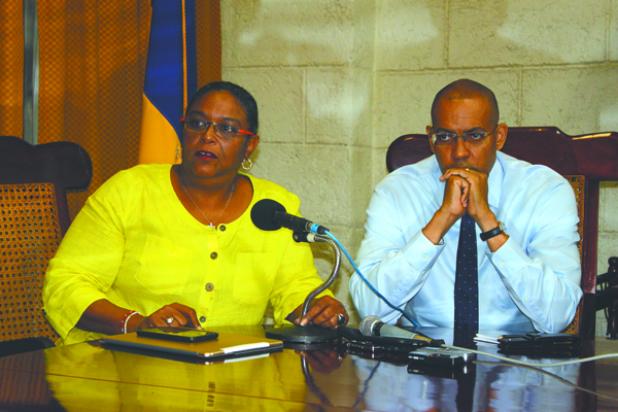 Sun, 01/15/2017 - 12:00am
Leader of the Opposition Mia Mottley is calling on the Prime Minister and Minister of Finance to report to the nation on the “true state of the Barbados economy”.
She made this appeal yesterday during a press conference in the office of the Opposition Leader, West Wing of Parliament.
Mottley in her address highlighted several events which she said have impacted Barbadians’ confidence in the economy in recent weeks.
Among these include “the downgrade by CariCris this week on the heels of 17 previous downgrades” and the decision by the Bank of Guyana not to accept Barbados currency. She also highlighted comments by economist, Jeremy Stephens that Barbados’ fixed exchange rate might be under threat, Jamaica Money Market Brokers advising investors to sell off Barbados bonds and “the belated admission by the Governor of the Central Bank, Dr. Delisle Worrell that Barbados has a debt problem and the further admission that the Fiscal Consolidation Programme since 2013 has failed”.
Mottley stated that, “There is a crisis of public confidence in the state and drift of the national economy and we, the citizens of Barbados, have a right to know what is going on.”
She further pointed out that, “The Barbados Labour Party is determined that Barbados cannot and will not drift along like this for another 12 months. It is either we are told the true state of the problem and are permitted to [make an] input in finding a solution or indeed that the government cut short the drift and inertia and return to the people for a mandate. But this government sitting in hope and wishing for a miracle is for us no longer an option.”
Mottley insisted the people of Barbados have a right to know, while stating that, “This is not Stuart Enterprises, and the people of Barbados need to know the true state of the economy and, that business people and investors alike need credible and timely information to influence their actions and decision-making processes, especially at the beginning of a year.”
In an attempt to get answers, the Opposition Leader posed eight questions which she said were directed to the Prime Minister the Rt. Hon. Freundel Stuart and Minister of Finance, Christopher Sinckler. Among these questions were: “Is an IMF austerity programme on the cards for Barbados?” and “Why in spite of assurances from the Minister of Finance that the economy had turned the bend, as he told us last year, why has the economy continued to fail to meet targets for economic growth and for deficit and debt reduction?” (MG)