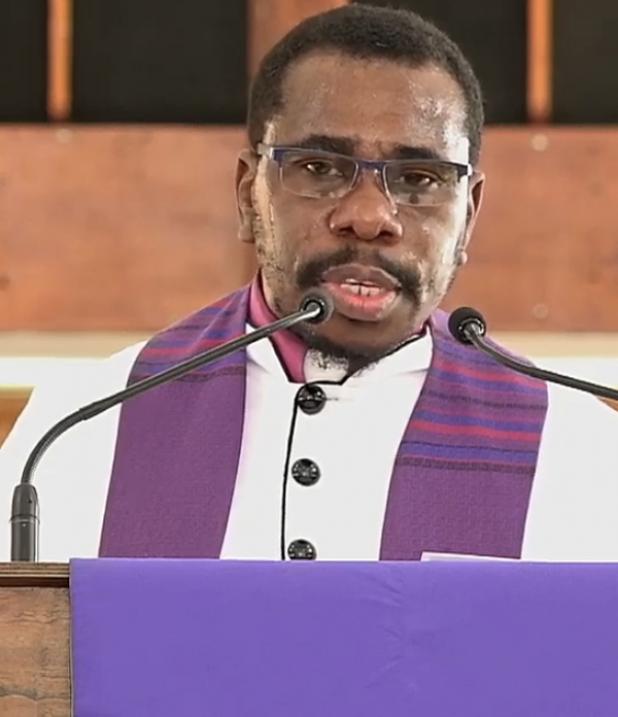 Bishop of the South Caribbean District of the Methodist Church, Superintendent of the Circuit, Rev. Derick A. Richards tried to reassure the congregation who were watching from home that God is with them during these uncertain times.

God is with us!

Be assured of the presence of God during these times of uncertainty.

Bishop of the South Caribbean District of the Methodist Church in the Caribbean and the Americas, Superintendent of the Circuit, Rev. Derick A. Richards gave this message during a Family Altar Service at James Street Methodist Church yesterday.

The Methodist religious leader said that God will not leave or forsake you. He also told the virtual audience that while many people may feel discouraged as their future seems uncertain in light of the developments of COVID-19, at this time it is a blessing to have a word of encouragement from God.

Referencing the Biblical story of Jacob, The Bishop of the District said that Jacob had lost all the things that people tend to cling to for security and his life was going in the wrong direction. Likewise, during these times of uncertainty, people may want to look at the emptiness within their life and they may have been going in the wrong direction and learn to appreciate the little things God has blessed them with and make life meaningful and fulfilling.

He stressed that in seasons of uncertainty, people have the hope of God’s promises. He said that God reminded Jacob that He will keep his promises and for Christians, he will do the same.

“Even in the midst of a pandemic, he says he will never leave you or forsake you, ” said Rev. Richards.

Confess your sins
In an emotional sermon, Reverend Richards preached that Christians should confess their sins as a people and admit that they have failed Him in so many ways of their lives. He also added that they have confessed that they have not taken enough time to care for the vulnerable, feed the poor or to clothe the naked.

“We have been stubborn, willful in our actions, deceitful in our thoughts, uncaring in our relation to each other,” said Rev. Richards.

He prayed that people would recognised where they have gone wrong and again submit their lives to Jesus. He also said that in times of darkness, we must look to God and remember the promise God has made when life becomes difficult.

Rev. Richards made reference to the year 1823 when an angry mob tore down the Methodist Church on James Street, noting that (today) something has threatened the church’s ability to gather in the historic building to worship.

He explained that in that period, The Late Sarah Ann Gill opened her home to Methodists for worship, sang hymns and encouraged each other in the Word of God. Rev. Richards said that today, the faithful gather in their homes to continue to lift up the name of Jesus.

The Reverend indicated earlier that though the church is not able to gather in the same space, God has provided a way for the people to stay connected so they can worship. After his sermon, messages were given which revealed that church activities will be held with the use of technology and online resources.

Despite the restrictions placed on public gatherings, the James Street Methodist Church will still have Bible lessons during the week through an online platform and members are still encouraged to collect their tithes for the church, which will be submitted through electronic methods or other methods that limit person-to-person contact. With the country presently at Stage 2, the elderly are being encouraged to stay indoors and everyone is expected to practice social distancing. There are a reported 14 confirmed cases of COVID-19 in Barbados.